Went to the show today. Didn't see much of it as we were there on behalf of our RFS brigade helping out with the show-jumping. Putting up and moving jumps, putting poles back up after the horses knocked them off etc.

At one point I had a few moments to kill and stood in the middle of the showground. Off to my right there were the rides, lots of loud music and motors and screaming as they tipped people up in all directions and spun them. Over to the left was a chainsaw demonstration. A bit further round there was a fracas in the cattle grand parade as someone's champion charolais bull tried to mount someone else's grand champion angus cow. To the front the trotters were getting sorted ready to race. Over my shoulder the Carlton Clydesdale team were leading off a parade of emergency services vehicles. Beyond that was the noise of sideshow alley. There was a helicopter giving joy rides over the showground.

And in the centre of the ring the horses were jumping over things I'd be hard put to reach... talk about focus ! I don't know how they didn't just toss their riders and head for the nearest exit. I guess it was a great demonstration of the concept of "bomb-proof".

Vicki Roycroft had four horses in the showjumping. Apparantly she comes to our show every year. Was nice to get to watch a five times olympian in action.

And the highlight for me was Katrina Hodgkinson. I'm not normally a fan of politicians, and since she has been the Minister for my dept, it's almost automatic that I have no time for her. But she was here to open the show, being the Minister for Agriculture. And then the music for the national anthem wouldn't work, and with no notice and no accompaniment, she stood up and sang the national anthem solo. That takes guts.

Thought I might start introducing you to the characters in this play. 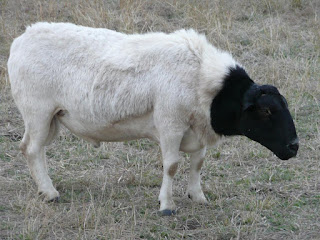 This is Boof, our flock ram. He's about 5 1/2 years old, purebred dorper from Kaya stud in Western Australia. He came to us because he broke his neck fighting and could no longer serve a commercial flock. Since we only had three ewes we thought we'd give him a chance. His other option was the butcher.

He can't lift his head above his shoulders and his front legs are partially paralysed, but he's fathered all the lambs on the place and now manages a flock of 12, which has at times included long-legged damaras with fat tails. When he stops running for snacks or chasing the ladies, or arthritis starts to get him down, we'll make sure the old guy doesn't suffer.

In the meantime, the girls love him. The lambs adore him and he's often found babysitting with lambs of all ages playing king of the castle on his back. He's a gentleman, who enjoys a slice of bread and a good scratch and doesn't hold a grudge. 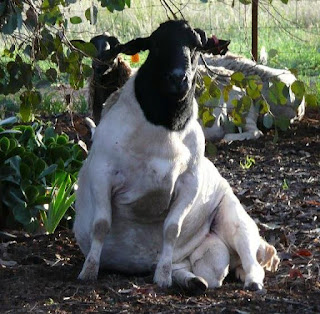