Good and bad news... My sister was flown to Nepean Hospital for an angiogram following what appeared to be a heart attack (the bad news) but the angiogram was completely clear (the good news). Despite her concerns about sedentary lifestyle and diet her heart is in great shape and she has no cholesterol build up at all.

Of course, this leaves the question of just what it was that she had... The docs says she could have a number of conditions : a virus that built up fluid around the heart, a "tic" in the heart muscle, something in the lungs affecting the oxygen to the heart, or some other thing that makes the heart just flutter at random. She did tell me, but I didn't take notes and nothing sticks in my head too long these days.

For all of these they treat the symptoms, as they don't actually lead to a heart attack. It would be nice to find out what it really was, but the local hospital lost the lab results and machine readouts that would have helped diagnosis. With friends like that who needs enemies. 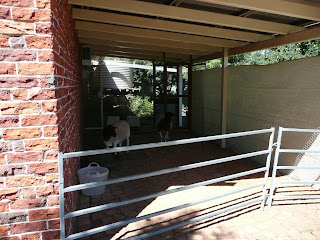 My carport still smells like a shearing shed. I covered the floor with straw and rubber mats to make it more comfortable for Max and Angus, and to absorb the waste. But it seems the smell is going to linger for a while. You may not be able to see the white in this pic, but Max had both eyes completely filmed and couldn't see to walk. The purpose of the carport confinement was to keep the sun off their eyes, as being blind they don't notice the direct light and don't blink, and the sun can make the pinkeye worse. 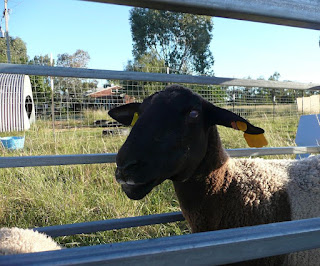 It was very scary being herded around and handled when you can't see, but she did pretty well. Especially considering she is the least tame of our ewes and generally doesn't like interacting at all. Her name is Max because the big yellow flock tag the breeder put in her ear is number 86.... that'll date you :-) Angus, her son and the only wether currently with the flock, had one eye affected and could lead her somewhat. He is just clearing up from a relapse which affected both his eyes and left him blind, and she returned the favour.