The shearing shed had seen better years. The old clear sections of roof had perished and let the rain in, and the floor was rotting out. Even sections of the wall framing and roof structure were starting to rot. Once the skylights were replaced with new laserlite and the remaining tin screwed back down, we could start on the insides. Leigh Farrell did the heavy lifting on this stage. 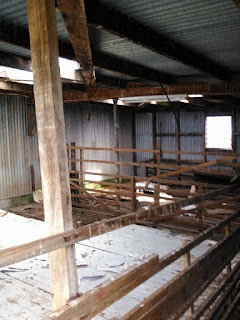 The floor was too dangerous to walk on and the support beams were crumbling away. 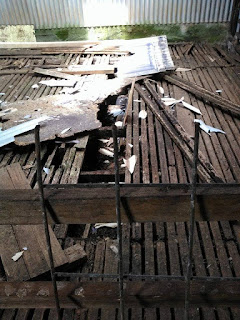 First job was to remove all the old floor and beams. This was accomplished with the use of a chainsaw ! We cut the floor slats between the beams to about a foot long (and provided Trina with a years worth of seasoned hardwood kindling) and removed all the old wood structure. 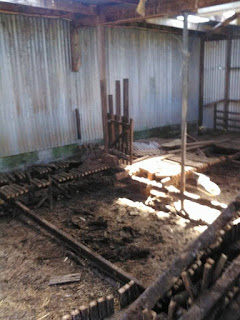 A happy find was that under the foot of dirt the shed base had originally been concreted, sloped with a drain. We shoveled out all the "compost" and filled garden beds with it, and cleaned the underfloor right up so the drainage could work. 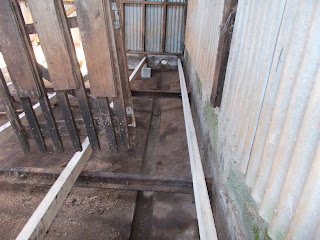 A second happy find was that the bearers were railway iron. A little rusted but still plenty of the core remaining so that we could just place new beams across them. The rotted roof supports and wall framing were also replaced.

New hardwood slats were then nailed across the beams. The gaps are to allow waste to drop down between them when the sheep are held here for shearing. It can then be hosed out using the drain to take it out the back of the shed. 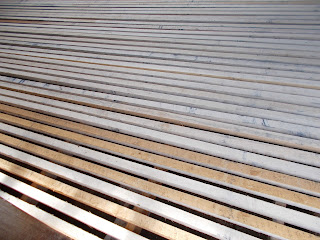 We were able to use if for shearing in November. There are still a couple of tweaks for optimum usefulness. We need a big sheet of heavy duty lino for the shearer to work on, as wool catches on new hardwood slats when you try to turn them. It will take a few years for them to wear smooth. And we need to set up the new catching pens. It's easier on everyone not to have to chase them round a big area. 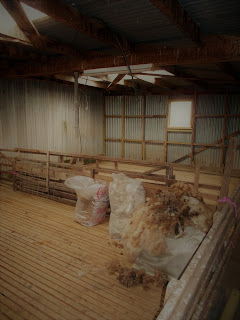 During the process the old louvers were taken out because they had a habit of vibrating out of the frames in windy weather and shattering on the ground. Matt Cassidy made new laserlite hopper windows that let in light, keep out the wind and can be opened when needed for ventilation. 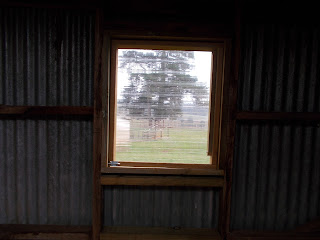 He also fixed the little loading door, allowing a ute to be backed up to the shed and sheep loaded directly into the shed if we choose to host other people's sheep for a shearing day. That way off-site sheep never need set hoof on our pastures. 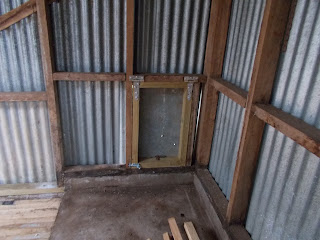 It turns out that two of the geese are female. I was told that geese don't have a great hatch rate so I left the majority of the eggs with them. As a result they proved everyone wrong and hatched 19 goslings ! Two died in the first day, the rest have made it to full feathering.

As goslings they were adorable fuzzballs that wee-wee'd their way around the farm under the watchful eyes of their parents. 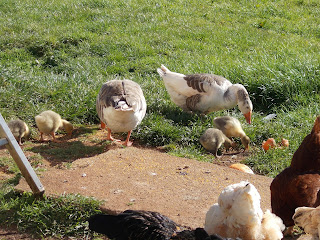 Geese are grass eaters, like sheep. I feed the flock a couple of cups of soaked grain each evening to help them stay warm in cooler weather. In the meantime the goslings grazed with their parents and grew like the proverbial weeds. 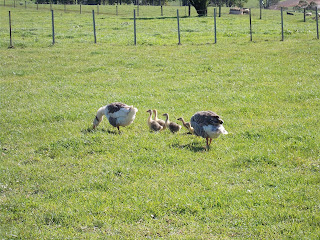 As crossbreds it's impossible to know for sure what the gender of each goose is until they start laying eggs and sitting on the nest. The aim is to have two or three pairs. I'm going to keep the original three adults and another three young ones. We could end up with any combination, but hopefully at least enough of each gender to form a stable flock. 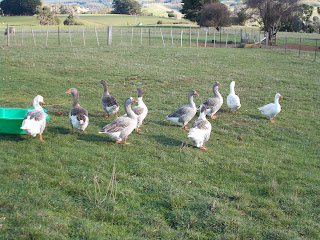