Have some sad news. Burke and Wills, our pair of geese, were killed by a fox last night. We found them this morning and I am gutted. We tried to keep them safe and I thought being such big birds a safe stableyard would be enough. But they were wandering the paddock in the cool of the night looking for something to eat and probably stood out like big white targets. They can't see to fly at night and the fox separated them. I hope that they are paddling in the perfect dam surrounded by soft green grass now :-( 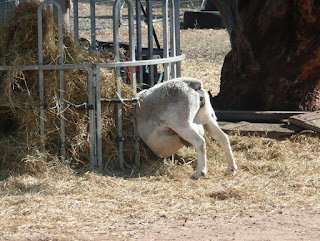 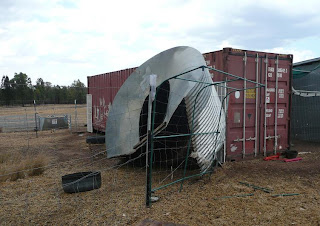 The sheep hoochie picked up and tossed.
So glad there were no sheep in it ! 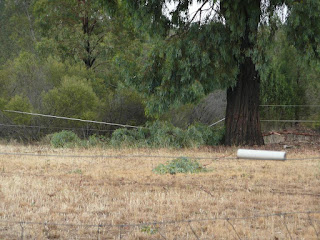 Branches off the big ironbark pinning the fence down. 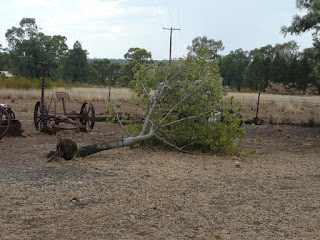 A young kurrajong tree blown over.
Posted by Elnini at 04:17 3 comments:

While I get the next post sorted out, here are some of the visitors to our bird bath during the extreme heat lately. 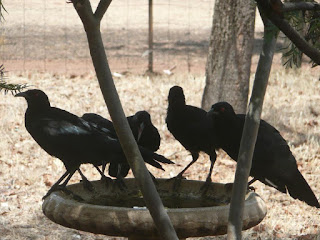 Related to crows, but travel in flocks. Differentiated in flight by a flash of white on their wings. These guys spend the day hunting and come back every half hour or so in the heat to freshen up. If you click on the pic to enlarge it you can see the red eyes of the adult birds.


A Peewee and some of the resident Apostle Birds 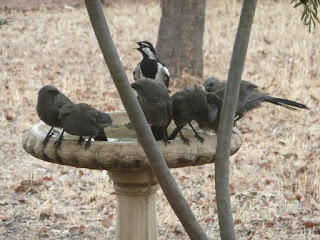 The Peewee is a magpie relative. An opportunist insectivore he'll have a go at whatever is around. Their signature behaviour is relentless attacking of windows and car mirrors. They probably live their lives with a perpetual headache.

The Apostle Birds are so named because they get around in flocks of a dozen or more. Related to the crows, they are also smart and noisy and have a sense of humour. They squabble like a large italian family and will battle with the chickens, sheep and cows for food.


A Rosella tests the water 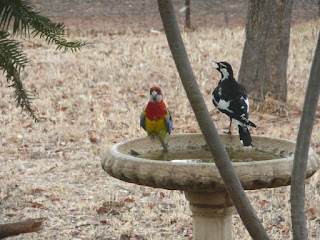 This little guy is part of the parrot family. He's pushier than his size suggests and will take on a gang of Apostle Birds for access to the water. They've been taking the unripe fruit from the orchard and grapevines. I am ok with this, it's a hard year for wildlife and nothing is going to make it to ripe with the drought anyway. 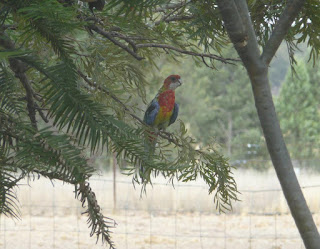 This is his mate sitting in the Wollemi Pine (a dinosaur tree) above the birdbath. She's trying to keep cool by letting air flow under her wings. The micro-climate under the tree where the birdbath is must be pleasant. 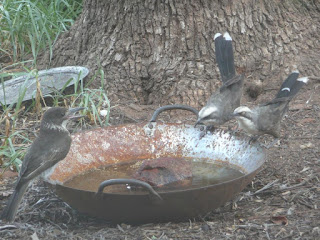 The young Butcherbird is fully fledged and able to fly well, but his parents bring him to the birdbath on the hot days to wait while they hunt. He's a relative of the kookaburra, a carnivore.

The Babblers are a rare species, on the watch list for spotters. We have two flocks that come through on a regular basis, and they are a pleasure to have around. They have a bubbling babble call, and are active and curious. They dismantled a shaving mirror that had been left out and moved the two mirror pieces across the yard and out into the paddock one flip at a time. We discovered one in the bottom of a hole which was in the flip-path by following the strange bubble noise and "tic tic" sounds to find a babbler in the hole trying to flip the mirror back out.


Some of our Hens 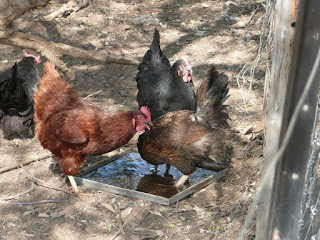 A rhode island red, australorp and brown barnevelder keeping cool by standing in a tray of water. They really appreciate these trays, evaporation keeps the water relatively cool. 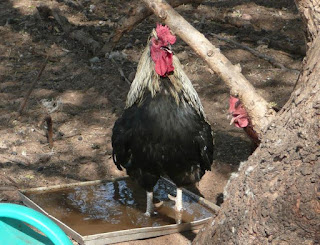 This is the younger rooster. He gets a water tray all to himself.  He only shares with his favourite hen.