We finally had some rain ! A good steady 60mm (about 2 1/4 inches) over the course of a day. That took the house tank from three rungs from the bottom to two rungs from the top. Have to be happy with that :-) Also saved me carrying water to the saltbush plantation and will give the olive trees a push towards a good crop.

We've been watching the Eurovision telecast. Some of the acts have been great, others... I'm still getting over the Russian Grandmothers and Jedward. And Englebert Humperdink ? The Goodies would be rolling in their graves. If they were dead. It's certainly an interesting excercise in ... well, maybe just an experiment in how much aural pain can be endured in one sitting. 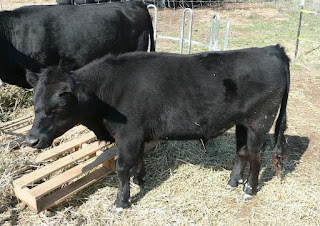 LITTLE MOO
Little Moo is a dexter steer. His proper name is Sandycreek Spock. He's two years and three months old, so is fully grown now. He's small for a "long leg" dexter, but had a hard start. His mother died when he was two days old and he was partly bottle fed and partly "self serve" with the other cows in the herd. Big Moo was one of them, and he came to us as a companion for her on the condition that he not be eaten. Little Moo therefore has a life tenure and a cushy one it is.

He's not particularly smart or brave, he's more like a permanent toddler. Everything goes in his mouth. He's a big softy and a sook, and loves a good scratch from me or a lick from Big Moo. He tries to bluff Jack, but even the lambs can hold it over him in the feeding scrum. He outweighs Boof but gives way to him completely. Mind you, even Big Moo gives way to Boof. Handicap or no, there must be something about Boof that commands respect.

Little Moo doesn't do treats, except the odd mandarin. He also doesn't do new things. He is therefore a little hard to train. He'd have been cute pulling a little cart and would have come in very handy bringing back wood for the fire. As it is, he gives Big Moo someone to boss around and makes fertiliser for the veges. And he's very huggable :-) 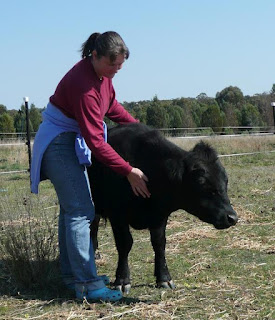