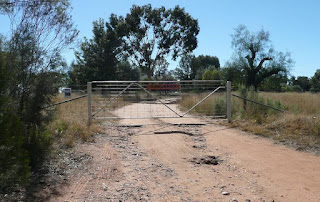 Oaklands is 28 acres of ironbark - cypress ridge. The original homestead of a much larger farm that has been subdivided. The front part of the homestead is over 100 years old and is built from the strangest combination of some kind of chicken wire and cement render. You can tell when a tradie has caught a glimpse of the construction because there is always a moment of silence followed by "What the f*** is that ???!!!".

Along with good thermal mass and sound proofing, it also acts as an electromagnetic barrier so there is very little wireless reception in the house. This means you have to stand by a window to get mobile phone reception and you won't get an electronic device to send from another room. This was probably not a consideration when they built it. There are, of course, not enough lights or power points, and as I am married to an electrician this will probably never be remedied.

There are approximately 18 acres of pasture and 10 acres of bush. Deep in the bush are the remains of a cement render and chicken wire pig sty, two cement render and chicken wire water tanks and the kind of rubbish dump that accompanies farms that existed before there was a local tip. This includes some kind of ute body from the days when utes were made of driftwood, reindeer bone and stone nails.

The vege garden is about a metre higher than the surrounding land. It includes a small wall of cement render and chicken wire construction (see a pattern here ?). I suspect it is the location of yet another garbage mound. The strangest things poke their way out of the side of the mound. I live in hope that one day there will be something strange and valuable, but so far it's been broken glass and busted plough parts. In some countries they find roman gold in the fields, I find rusty springs.

The weather is alleged to be changing, with "a 90% chance of between 20 - 40 mm of rain" tomorrow. I put the lid on the salt block just in case, but I confess scepticism....