Mum and Dad visited today, had a lovely afternoon. They'd been up minding my sister's kids while she was in hospital. Dad and DH took DH's youngest son down to the dams and went netting for yabbies. Apparantly they caught a few but let all the females go and came home with one large male to cook. Everybody had a teaspoon sized sample :-) At least all the boys had fun. 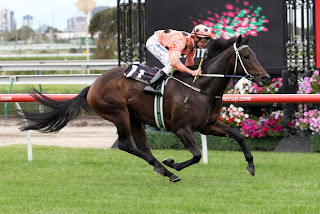 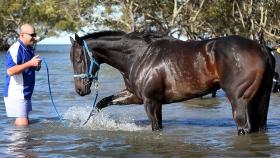 What can you say ? 21 straight wins, never lost a race.

We wish her the best of luck at Ascot in England in June !!

Ziggy is growing fast, on all the milk I'm not getting ! We went from 2 litres per day to suddenly just a few drops. At first I thought he had perfected his timing and was getting on just before I came out to milk and leaving me nothing. Then this afternoon I came around the corner after attempting to milk and found a full-looking udder and a calf with foam on his face...

I grabbed a container and milked a cup and a half while Big Moo was having a drink of water. Obviously she's gone from sharing with me to being the hold-up queen. Since I have a very slight advantage in brain department I'll have to out-think her. I could separate them for the night, but it's winter and I'd rather he was cuddled up to Mum.

Perhaps put her in the house paddock when I get home after work (say 4.30 pm) and then milk in my new cowshed with lights at maybe 10pm and let her back in with the boys. Or I could let Ziggy in at milking time and let him have one side while I get the other. While he's little that might work...

Here's the little guy guarding his milkbar. Growing fast when I look back at his birthday pic ! 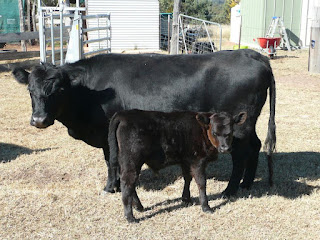