So, here's the story of our journey so far !

The removalists were fast and friendly, and when they said they pack tight they meant it ! All my worldly possessions went into two twenty foot shipping containers. With the last container one guy was pushing against the stuff to hold it in while they wedged the doors shut. 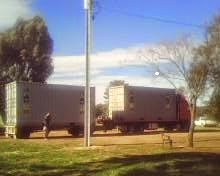 They were so fast they packed a few things I'd wanted to keep out, including the usb cord for the camera and the keys to the gun safe. DH wanted to wrap the gun so it wouldn't rattle, but couldn't open it to do that so he filled the safe with expanda foam through a bolt hole... he's going to have something to do on long winter evenings cleaning that out !

They packed on Monday and loaded on Tuesday, and went to leave at about 3pm, only to find their truck wouldn't start ! That took about half an hour to fix but they did get going. The containers won't reach Scottsdale til the 11th of August apparently, so we're camping for a bit. We've organised to pack the essentials in the trailer.

So, that left us standing there in the gathering gloom realising we had only that evening and the next morning to clean the whole house and farm and pack the cars and trailer and do the last minute drop offs... That was looking like a "work til the small hours" task.

Then within 15 mins we had my sister and her husband and two of their kids, two couples from the fire brigade (one brought the tanker out to blast out the compressed poop and pee and hay from the carport where the sheep had sheltered after shearing) and two of DH's kids all arrive and the place looked like a scene from renovation rescue (except it didn't end up any prettier, just clean :-)) as people were all madly cleaning and sweeping and vacuuming.

They had it all done by 8pm so we had time to take DH's kids for a quiet dinner and then crawled into bed (two air matresses on the floor).

Thankfully the cats had flown out Monday morning before the removalists arrived so they weren't caught up in all the rushing and chaos.
Posted by Elnini at 16:56