Big few days, the sheep and cattle set off on their journey to Tassie. The first wave of the Great Migration.

On Saturday Steve Vickers (of Vickers Animal Health) came and helped with the vaccinations and other husbandry because my knee is still iffy and there's nothing like wrestling sheep to abuse a knee. He did the ear tags and vax for the cattle and then helped with the drenching, tagging and feet trims for the sheep.

Here are DH and Steve trimming Turtle's feet ( he's too small for the tipper). 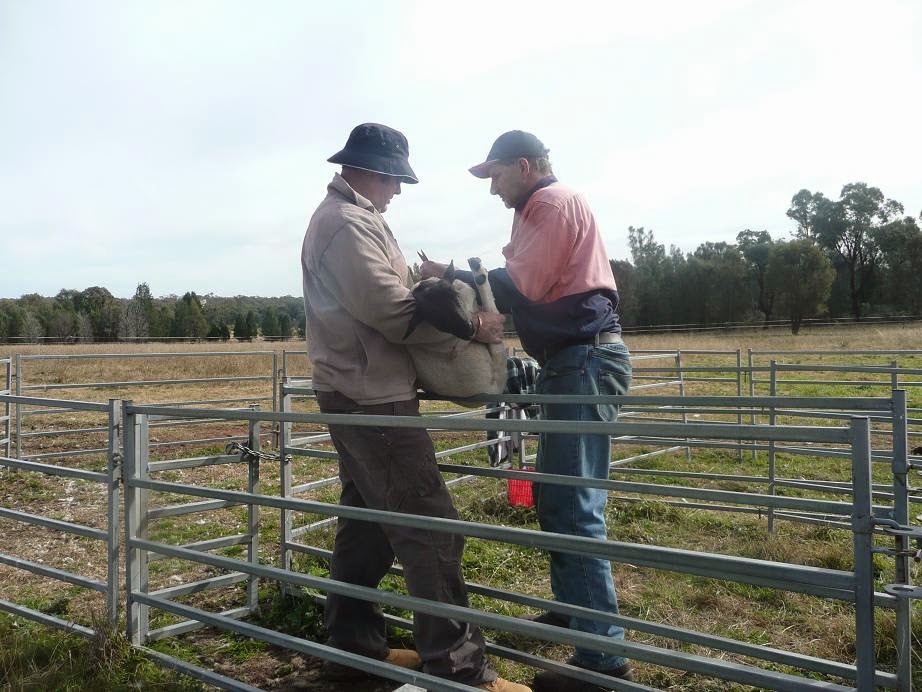 And here are DH, Steve and DH's youngest son doing Medea's feet in the tipper. 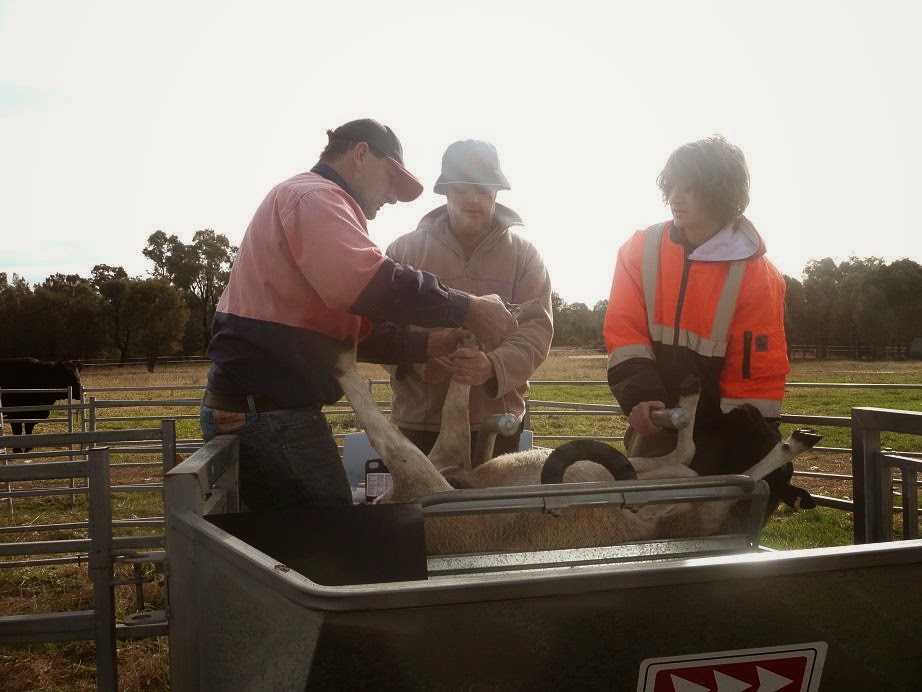 Steve does travel a bit so if any of you Aussie livestock wranglers need a hand let me know and I'll pass on his contact details.

On the Sunday the decision was made to euthanaise Max, the oldest ewe. She was losing condition despite being on free feed hay, and was struggling to get up because of arthritis. It was decided that she wasn't likely to survive the trip and wasn't likely to last long with her condition falling.

At around the same time Max passed, Molly gave birth to twins. One boy and one girl. We sent the boy with Steve to hand raise because Molly only has one side left on her udder and it wasn't going to be possible for us to hand raise a lamb this time around during the move.

Both the sheep and cattle were given a good dose of Tranz, electrolytes, minerals and vitamins that allegedly help with the stress of moving. 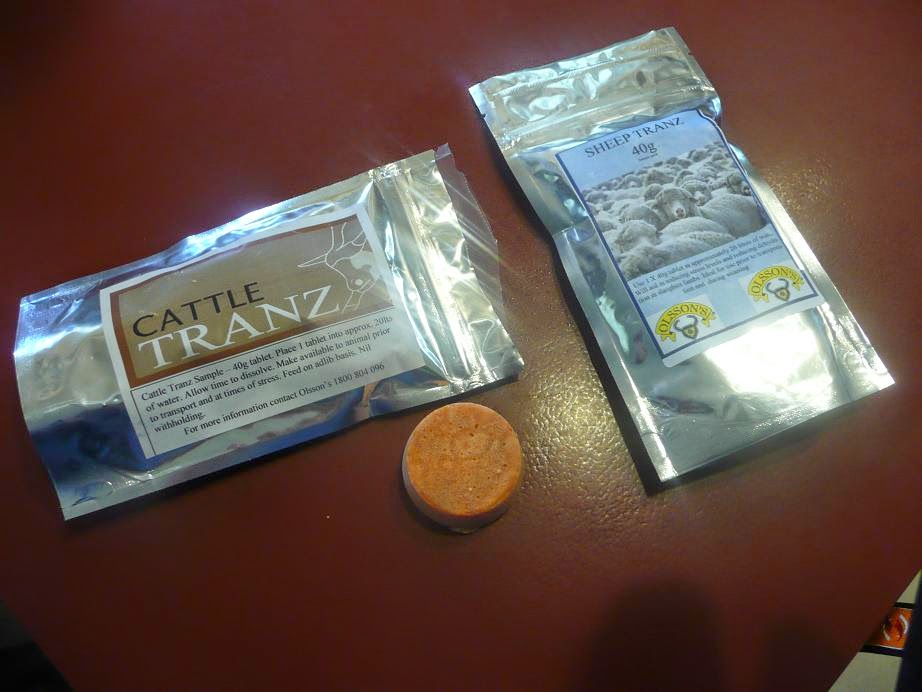 Today Dave from Dick Smith Transport came for the flock and herd. The truck was bigger than I expected ! 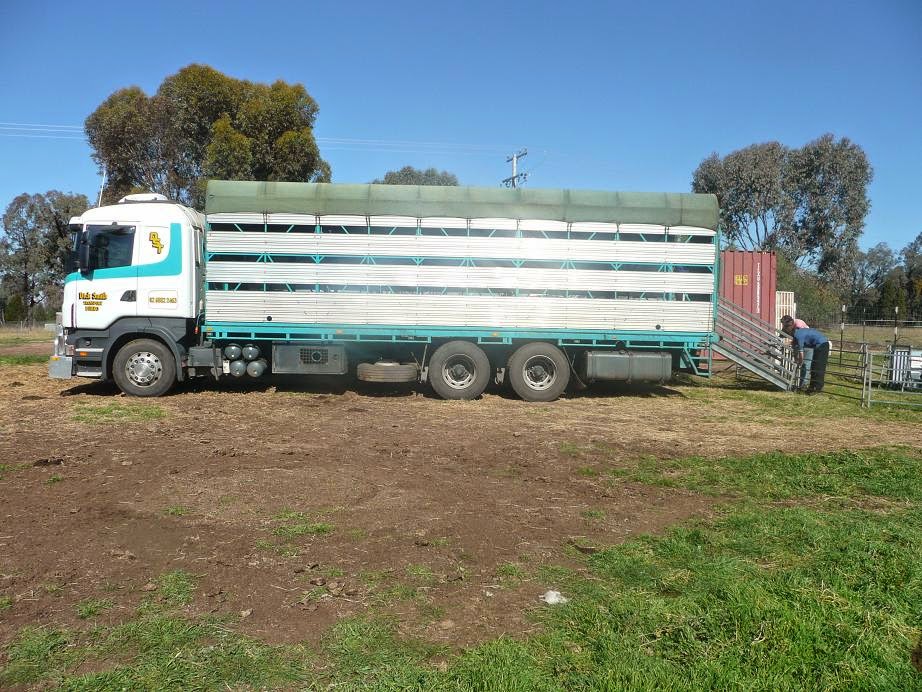 The portable yards did the job again, great investment. I can't imagine working sheep without at least a decent set of yards. The tipper and the ramp are the icing on the cake. 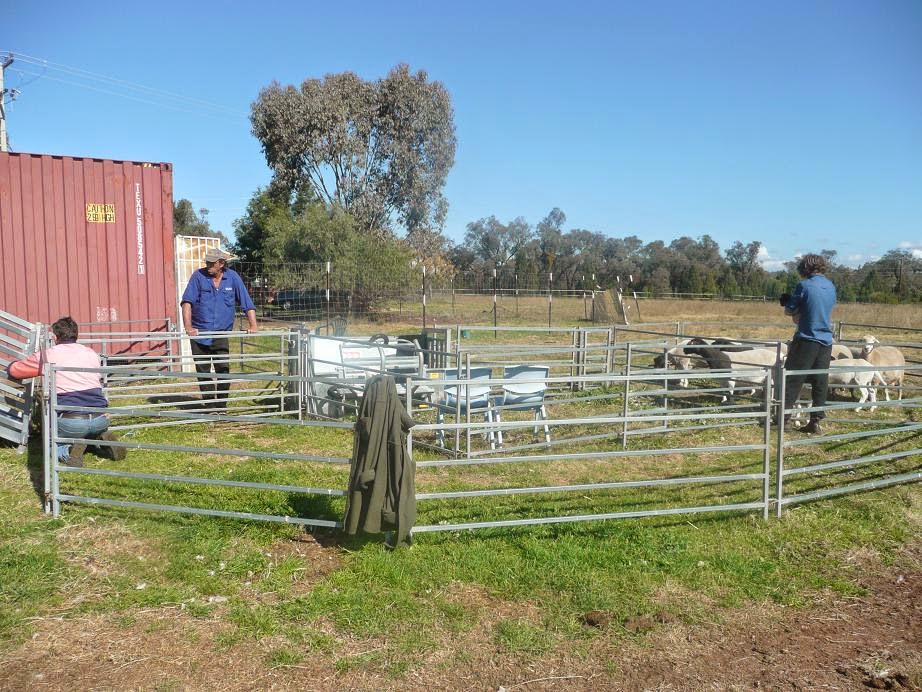 The sheep all loaded in good order, despite the steep climb up the ramp. The driver put Molly and the ewe lamb in a separate compartment so the little one wouldn't get stepped on. They'll be held at the local depot for a week or two until the lamb is big enough to go on the long trip to Port of Melbourne. 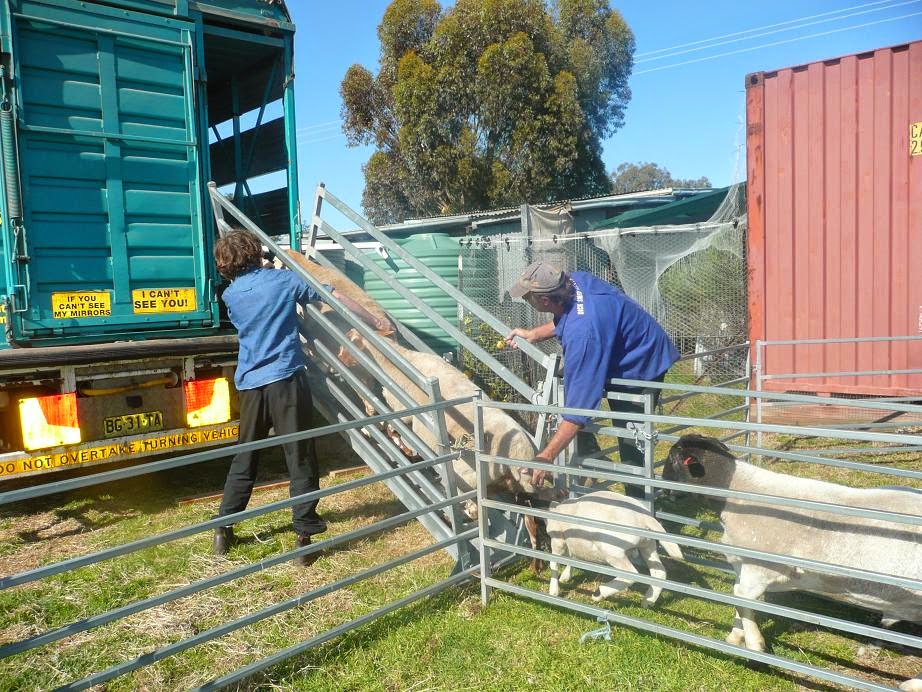 We loaded the cattle from next door's yards as our loading ramp isn't heavy duty enough for cattle. They were pretty relaxed, taking their time up the race. 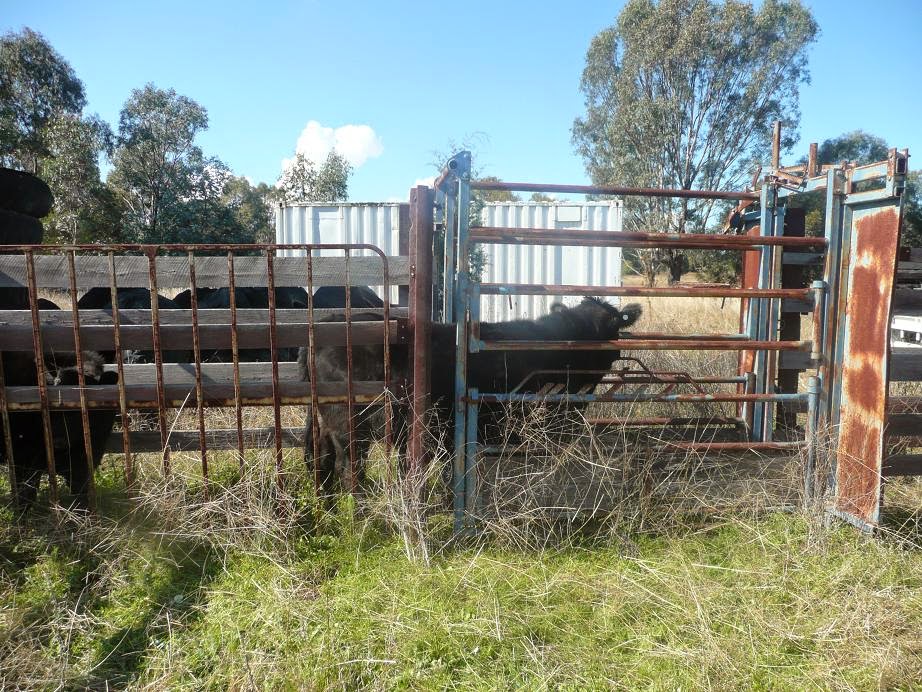 While we did need some pushing and poking to get the last couple into the truck as the compartment was becoming a little more crowded, at no time did the driver suggest getting a cattle prod or act in any way besides calm and patient. More than happy to recommend the company. 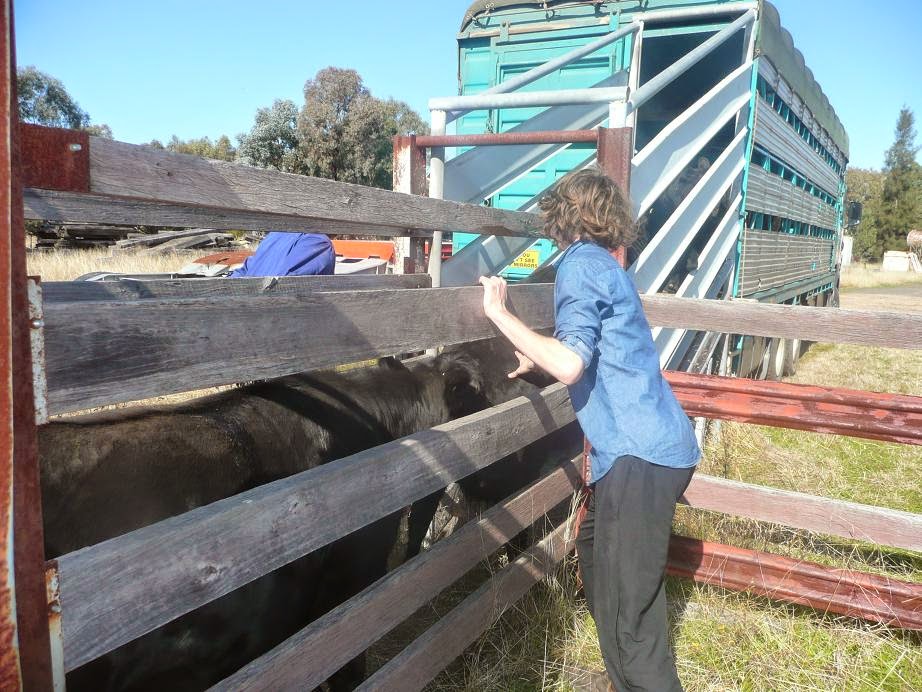 It was pretty tough watching them drive away, a bit like sending your kids to boarding school I guess. I look forward to seeing them at the other end ! 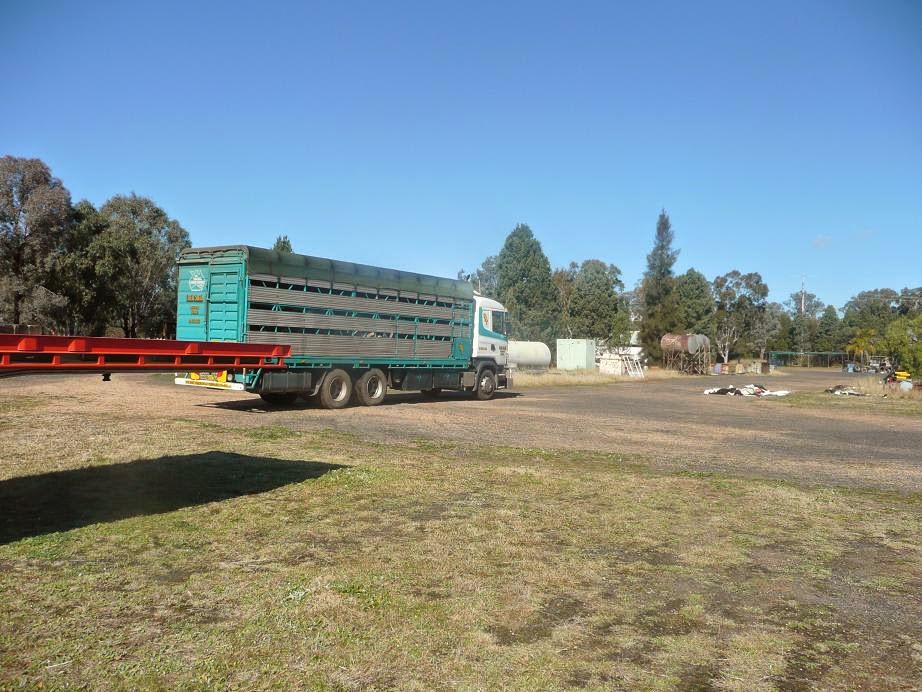 Page Transport will take over at Port of Melbourne and get them across the Bass Strait, and then delivered from Devonport to Scottsdale. Travel safely little ones !
Posted by Elnini at 04:17