Wills the goose laid an egg today, in the hay mulch of the orange area. She and Burke the gander are a little protective of it, but will probably get far more defensive when she start to sit seriously. She left it sitting for a few hours while they grazed, I assume it's like chicken eggs and is "on hold" until she gathers a clutch. I was worried a crow might take it, but it's probably too big a load for even a crow,

Swapped Medea and Max between flocks today. Max has put on enough condition to run with the main flock as they have access to the round bale all night. Medea is close enough to lambing to warrant keeping a close eye on her.

The sheep are used to being moved in and out of groups and all get on well enough, but the swapees are always confused for the first half day or so. Medea does love being in the house paddock though, lurking by the yard gate for treats and scratches.

Ziggy had another halter lesson today. He's not hard to handle, and has mostly figured out not fighting the rope. Leading is another thing altogether, he's much less interested in walking that in standing quietly. I handled him all over and brushed him, and fed him a treat once he was relaxing. He still doesn't feel I have anything he really needs, as his mother provides all. 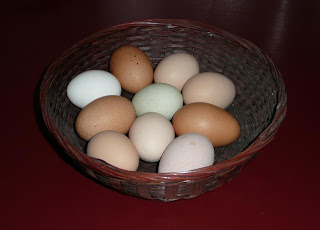 The white one is from the spanish hens, the green one from the araucana/wyandotte cross, the dark ones from black barnevelders and the speckled from brown barnevelders. The paler ones with a pink tinge are from the rhode island red, the cream one from a wyandotte and the soft brown from the australorpes.

I sell the eggs for $3.50 a dozen at work, it helps buy the scratch mix and they are half the price of (alleged) free range eggs in the supermarket. The buyers like the rainbow cartons best :-)
Posted by Elnini at 04:49