First, a lady who'd been recommended to me for house cleaning came to discuss doing one day a fortnight. DH & I decided that him paying for a couple of hours cleaning to assist me was preferable to either a) me doing all the housecleaning by myself or b) me nagging him to do his share. If's he's willing to cough up some cash to save himself some work I am more than happy to let the professional do the job. Likely she'll be faster and better anyway ;-D

Then the lady who owns Ziggy's dad came by to show me how to start Ziggy under halter. There were some theatrics and some sulks, but in the end he stood quietly while tied and did a reasonable approximation of walking in the right direction when lead.

Little Moo had some "show leading" lessons and apparantly aquitted himself well. Big Moo was simply grouchy and unco-operative, but she came into heat today so that's probably to be expected. 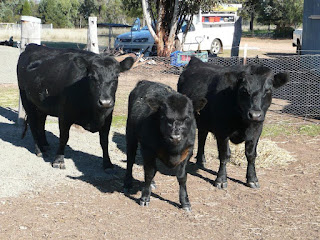 L - R Big Moo, Ziggy & Little Moo.
Jack is off to the left with his head in a feed tub.

Once the cattle lady left we whizzed over to the fire shed for monthly training. Today we pored over maps and aerial photos of the brigade's territory and then went for a drive to look at the same places from ground level. There are some roads we won't be driving down if there is a fire coming ...

DH and his youngest son spent a couple of hours mowing the pastures around the house to make a firebreak. The tree line is well back, but the long dry grass can carry a fire to the house. Especially the long steep slope to the northwest. Keeping that grass down this summer will be a priority.

I was finally signed off on my qualifications and went to get my PPE. Trousers, jacket, helmet, flash hood, boots, goggles and gloves. All nice and shiny new, I'm going to stand out like the proverbial at my first fire unless I can find an old pile of ashes to roll in !

Speaking of fires, our next door neighbour had their chimney catch fire on Monday night. They rang 000 then went outside to watch (they assumed) their house burn down. We got the alert and DH was over the fence and there as fast as he could run, and had the fire out before the trucks reached the house.

They weren't short of assistance, five trucks and two utes showed up. The sheep all lined up along the fence to watch the blue and red lights and listen to all the radio chatter. Once the guys in the breathing apparatus had made sure there were no lingering sparks in the ceiling DH cut out the burnt wiring and rewired the house circuits so they could have the power back on that night.

Yesterday the home-owner bicycled over to give DH a box of chocolates and a gift card to say thanks. He was quite tickled :-)

The two ewe lambs are coming along boistrously, and have been named Salome & Sukie. DH and the farmer looking after Dave have now attended to Dave's testicles and our next sheep-operation will be vaccinations.
Posted by Elnini at 01:13