Moved Burke & Wills today, back up towards the house. They've been trying to nest, but each night a fox is harrassing them until they run to the water and he steals that days egg.

They've been making it clear that they are feeling very insecure and wanting rescue, even going so far as to march all the way in with the sheep at the end of the day. I haven't had anywhere safe to put them that isn't going to be in the middle of all the activity, no place to try and raise goslings. Until today. I had a brainwave ! While the majority of the vege garden is off limits (geese may not scratch like chickens but they enjoy eating leafy greens) the small area with the orange tree is perfect !

I did a bit of tidying up before I moved them in, chair out to under the grapevine and a small gate installed. The orange tree has had a much needed prune, the spiky shoots from below the graft have been removed and there is now a two foot clear zone underneath. That end has been weeded and mulched like you can see in the pic of the eastern end. The area is maybe 10 feet by 25 feet. I've also put in a sheet of plywood leaning at 45 degrees against the wood fencing at the eastern end so they can have some rain protection as well as the shade from the orange tree. 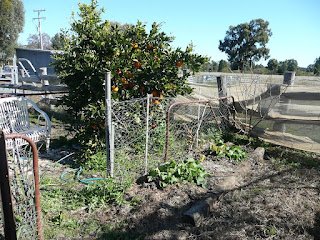 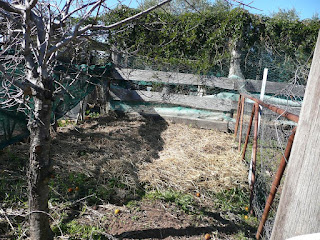 Like most of the contruction that was here when we moved in, the garden is pretty makeshift, but I think this will be an ideal nesting site and night pen. The outer gate (behind the seat in the western pic) opens into the stable yard, which has a good cover of soft new grass for grazing. I don't know if they have any eggs left or are going to make another attempt at sitting, but this might just be the best solution short of an island in the dam.