It's been a long weekend, we drove 4 1/2 hours each way to attend the 50th birthday party of a good friend, and I am very tired. I didn't even hear the highway traffic metres away from our motel room, but I am certainly feeling the night spent on a normal mattress instead of my water bed !All was in order when we got home, thanks to my neices who fed and watered all the animals.

******************************
I did have some time to do some thinking on the drive, and it looks like I am going to have to apply for one of the jobs transferring up from Parramatta. The redundancy payout, being very much less generous than they have been in previous restructures, is not enough to clear our mortgages and I would have to find another job straight away. So if I have to remain employed I might as well keep doing what I know with a good team of people instead of working the same hours for much less and not knowing what I am in for.

I feel bad for the staff at Parramatta who are going to have to make the call on whether to uproot their families and move so far, or lose the job. The staff at Orange are in just as bad a position, there are 10 staff there and they've lost 7 positions. And then there are the offices which are just closing completely.

The department is going to lose alot of experienced and skilled staff, it doesn't make any sense. Whatever they are putting in the water at Head Office is certainly given them some strange ideas. 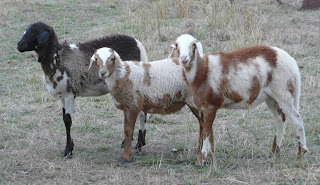 From left to right we have Cocoa, Taffy and Pinkie at six months old. These girls were purchased from an essentially wild flock at Narromine at weaning. Unlike the dorpers they never really warmed to domestic life and caused some issues simply by being alot more flighty than the dorpers. A push light enough for the damaras left the dorpers unmoved, and heavy enough for the dorpers sent the damaras to the hills.

Cocoa was the wildest and also the ringleader. Taffy was the quietest, she would at least take a little food from your hand if you stretched right out and so did she. Pinkie was just really scatty, she spent six weeks with another flock after getting through a fence and forgetting how to get back.

In the end we found them another home, but not before they started their own dynasty, chief among whom is the redoubtable Bandit. More on him later :-) 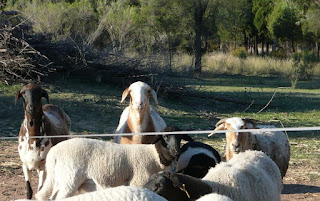 Here are the girls (Cocoa, Pinkie & Taffy) just before going to their new home, where they settled in happily at a farm where the owners don't necessarily want to be able to cuddle their lawnmowers.
Posted by Elnini at 02:26