It seems we've settled down into a routine with the milking. I mostly get between 1 and 2 litres and no fuss. Ziggy even seems to have figured out what to do when I pause in the milking and go to get him.

Sheep are all looking like bowling balls, except for old Max who is a little light on. I might seperate her and give her a bit extra now the weather is cold and the grass has dried off. I was assuming that the others were all pregnant, but news has me wondering if they are all just very fat...

I loaned Boof to another farm in September/October last year. Ran into the gentleman yesterday and he advised that there were no lambs resulting ! Not a one... Could the old guy have hit a wall ? He's certainly been courting the ladies here, I hope it was just homesickness.

I have a sick chicken. No scouring, eye boogers or nasal discharge, she just looks miserable. So I've locked her up in the chickie hutch where she has somewhere warm to sleep (she's normally a tree chicken but can't jump up right now) and food and water she doesn't have to compete for. Next step is to worm her, and might as well do all the others too. 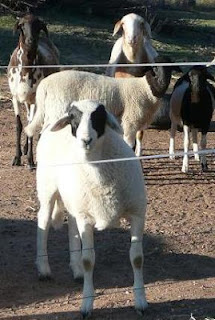 BANDIT
Bandit was the first lamb born to Cocoa, the damara in the top left of this photo. He was a big lamb and fast to get on his feet and get going. He grew quickly and was very solid. For these reasons, and his striking markings, we left him intact and sold him as a ram to a family in Gulgong.

What we didn't know was that he was more than a fast grower, he was a fast worker ! He managed to serve the three damaras before they went to their new home, Min before he went to Gulgong, and immediately the two ewes on his new farm. At the age of 4 1/2 months !! We know it was Bandit because Boof was on loan elsewhere.

This is Bandit's new dynasty, he certainly throws interesting coats ! 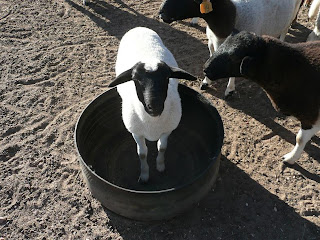 This is Flash, 1/4 damara 3/4 dorper, Min's little girl. She doesn't miss a trick and is making sure she is standing in the first feed tub in the line so she gets her share. 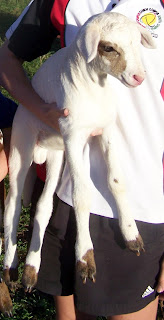 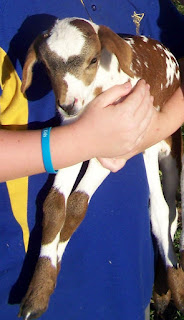 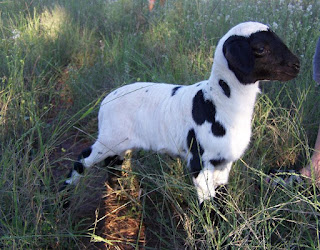 A little ewe lamb from the Taffy the damara. 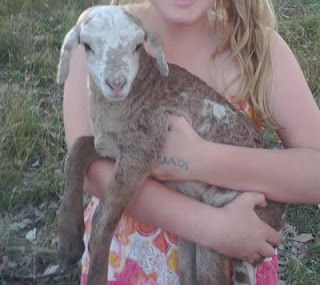 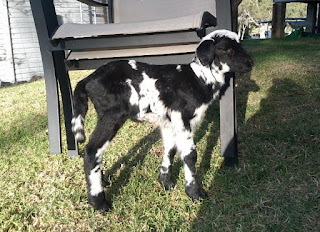 Thelma and Cocoa the damara are due to lamb any day now.