It's been a mixed week of sun and rain, warm and frost. There is a confused wattle tree by the front gate which seems to be deciding whether to burst into bloom or go into hibernation. The chooks are completely flumoxxed and have been laying right through, today being the shortest day of the year. I am not sure what prompted the extended laying as they are all heritage breeds and should have gone off the lay sometime in autumn.

This afternoon was a true pleasure. To the south a sweeping grey green cloud with shifting veils of rain,  to the west a golden afternoon sun slanting through a delicate rain, to the east a rainbow against steel blue clouds, and to the north a pile of white thunderclouds gilded underneath.As I walked back from feeding the geese the sun caught the three male cattle sharing their supper tubs, and the light rain had just tipped their coats, making a sparkle that shifted as they moved. Breathtaking. I found a chair and just sat out in the paddock for a quarter hour enjoying the sky and the light. 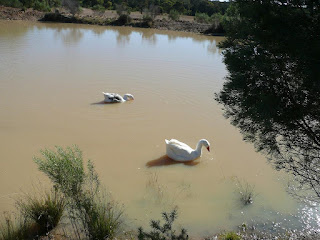 Burke & Wills are a pair of (at best guess) emden geese.  They are named after a pair of Australian explorers who died on an expedition because they are, quite simply, terrible at exploring. When based in the house yard they didn't even wander around to the other side of the house. They had to be carried down to the dam in the back of the ute. I am at a loss to explain how their relatives migrate thousands of miles yet these two couldn't find their tail feathers with a road map.

There are apparantly more people scared of geese than of dogs, and I have seen visitors terrified of this pair. I can assure you that it's all bluff. They do, however, make terrific watch-geese simply for the volume of noise they produce at the slightest excuse. 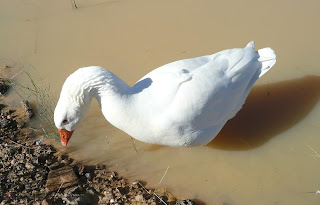 Burke is the braver of the two, and has managed a few flights from the top of the hill down to the dam. The end results include both a lovely sweeping turn and landing on the dam, and a full-on belly landing in the mud. 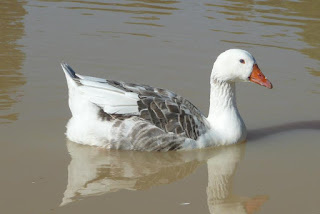 Shyer than Burke, she seldom achieves more than a flapping run. Given Burke's track record at landing we might assume she is the smarter one of the pair.