It's a lovely Sunday afternoon. Big Moo has found the trailer of hay I bought yesterday and is circling it, taking one bite out of each bale. She doesn't realise yet but it's harder work than the opened up round bale she has access to... but hey, it's stolen hay so it tastes better :-)

The guy I bought the hay from is also a state govt employee, or was. He has been given his marching orders and his wasn't voluntary. They were told to shed 60 staff and only 17 put their hands up so the balance had to be picked. He's not feeling so great.

Moved the sheep to the Country Energy paddock, so named because the power poles go through it. They knew something was up when the removalist (stepson in farm ute) came and picked up all their belongings (feed tubs and lupin block) and left the gates open so they could follow. There was much excitement and speculation until they knew which gate they were headed for and then the stampede was on ! For some reason they love moving to a new paddock, no matter how often they have been there in the past.

DH and SS moved the two portable greenhouses to a spot that actually gets some sun. Tomorrow I will buy some pots and transplant the tomatoes and put the lettuce seedlings into the bed the greenhouses came from. And check out the new Petbarn that has opened next to the hardware store. Chances are they won't have any cow or sheep toys, but the cats might get lucky.

Ziggy had his first big boy meal last night. Just a cupful of calf pellets and sweetbulk. He's been sharing with the steers and his mother since he was about a week old, but this is the first time he ate by himself and it's more a token than a meal, his mum still provides what he needs. It's the first step in socialising him to handling as working full time means I haven't had a chance to halter break him, the early dark in midwinter means there's time to feed and that's about it. 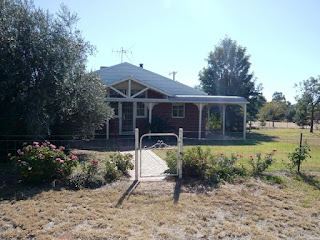 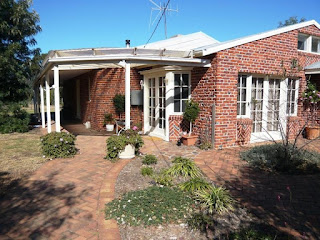 From the back, where most of the traffic actually happens.
(this one is a bit older, the garden alongside the path is full of herbs now)
Posted by Elnini at 22:17