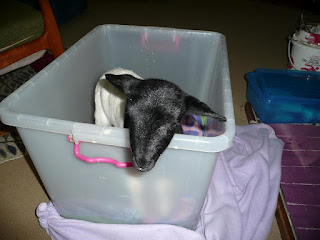 I had some colostrum from Big Moo frozen, and we figured that cow colostrum is better than none at all. I also have about 800 ml of sheep milk frozen and that will be shandied with the colostrum after 48 hours and then with milk replacer to make the transition easier.

Mum recognises his baa, and he recognises her's. She's happy for him to be near her but cartwheels him if he goes near her udder. And he has wobbly legs, like the joints are a bit unstrung. I think he needs some good food, a warm place to sleep and lots of trippy trapping around to strengthen those legs as he's spent alot of his first day being carried.

He was a bit hollow and dehydrated this morning so we upped the size of his feeds to 200 ml, and that pulled him up. He seemed to be just playing with the teat at the last so I think we filled his little belly.

The vet rang to see how he was going, and was disappointed that he'd been rejected. But a live lamb and a live ewe has to be good when the alternative, if she hadn't been found and helped in time, was the loss of both. I call that a win by any measure.

He's had a rough start and lambs can die of so many things, but he's been given a pretty good chance. Hopefully I'll be able to post some bouncy pics soon.
Posted by Elnini at 03:50