Well, I had a ditch witch instead of a house cow last night. She stomped and flicked and sidled and brushed me off. She was irritable and bad mannered to a degree I've never (thankfully) seen before.

I ran through the list of things that might be irritating her... Was I pinching hairs ? Did I have fingernails ? Was she too full and tender ? Was her food ok ? Was Venus in transit with Jupiter ? etc etc etc. Nothing. I can only assume she was in heat. Probably about time I started tracking that again.

Was hoping she was in a better mood tonight, but it turned out to be a moot point because she and Ziggy have clearly found another opportunity for a calf head to fit through the fence. Empty. Could hear the tumbleweeds in there.
*****************************

Found an egg cache ... twenty eggs of varying parentage. Comparing the colours and shapes I figure they could be up to 10 days old. Midwinter and at least half the hens are still laying. It's nice to have the eggs, but it does make you wonder what the summer is going to be like.

Here are the Three Amigos. All about 4 months pregnant now and delighting another farm for the short term. I miss them. It's not easy having up to seven ewes all trying to climb into your lap and crowd the others out, a sort of woolly glacier, but it certainly made you feel loved ! 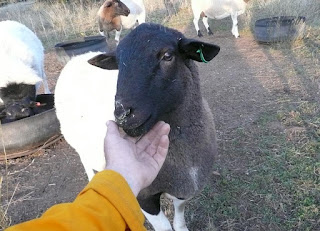 STAR
Poppy's twin, and a little shyer in some ways. She's a nice steady ewe who inherited her mother's barrel body and short legs. She likes to reciprocate when she is being scratched and makes little flea-ing nibbles up your arm. She was the first to accept the cordless clippers and was happy to stand to have the wool on her lower chest clipped to remove the itchy grass seeds. 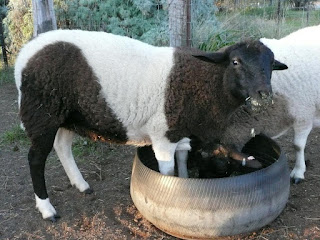 POPPY
"S'cuse me, I'm busy here !" Previously featured on this blog (28 June), Poppy is lankier and taller than Star. If "lanky" is a term you could really apply to a dorper... Poppy has already taken on the flock leader at the new temporary home and although the other ewe, Bunny, is well established and bigger, it will be interesting to see if Poppy's sheer belief in herself will win out. 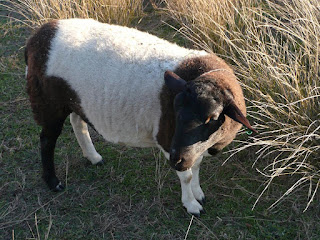 HARLEY
Niece to Poppy and Star, her mother is their full sister from the previous lambing. She is the result of a teenage pregnancy, her mum introduced us to the reality that dorpers can get pregnant at five months old, giving birth at ten months ! It was a hard birth on both mother and lamb and it took shy little Harley a while to catch up with her bolder aunts.

These girls were still pregnant earlier than I would have liked (they broke into the ram's paddock, not he into theirs) and I am hoping they have an uneventful lambing. It will be interesting to see if the next generation builds on the confident and steady qualities this maternal line is showing.
Posted by Elnini at 05:51