It's been a rough week for the sheep. Harley slipped a male lamb last Friday, poor girl tried hard to wake him up, but he was born too early. She needed a shot of oxytocin to help shed the placenta, normally the lamb suckling stimulates that.

Tonight, a week later, Poppy went into labour and presented with a nose first and front legs back. Very firmly stuck. She pushed and pushed and was about exhausted by the time the vet arrived, but still had reserves to get up and bolt into the bush when he pulled up.

So we had to pursue her around the paddock until I could make a flying tackle and pull her up. Then the vet got the legs forward and pulled the lamb and she just went limp with relief that the pain was over. But the lamb was alive !

Being a first time mum and so traumatised she rejected the little fellow so he will be hand raised. Named "Friday". I'll get some photos tomorrow. With only Star and Molly left to lamb we now have all extremities crossed for quick and easy births ! 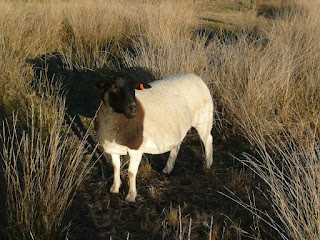 Molly is Medea's first daughter. She was a teenage mum, pregnant at five months. Her lamb was Harley, a hard birth because she was so young. She's now within two weeks of lambing for the second time and I am keeping a very close eye on her.

Molly is my second milker and my sweetheart. She is the one who will leave the feeding scrum and walk over to me for a cuddle. A steady and cheerful ewe, I am looking forward to both watching her as a mother again and having her in the milking parlour.

She and her mother make a formidable pair. I can see how flocks can form around a nucleus of a female line and the bonds between mother and daughter hold the flock together. The ram is almost incidental to the structure.
Posted by Elnini at 04:43