The night of my last post was a busy one. Lambing at 2am ! Lucky I woke because the second twin needed to be pulled. One of her front legs was caught back. The photo below is of the ram lamb the next morning, I didn't think to take pics in the wee small hours ... The little ewe is there, on the other side, but I haven't caught a decent photo of her yet.

Dorpers are hard enough to photograph at the best of times as their black faces seldom show up well. When mum is determined to stop the paparazzi it can be almost impossible to get a portrait ! 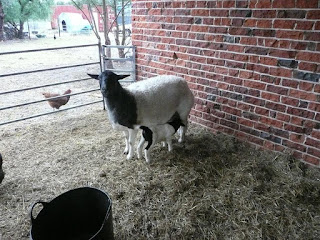 The maternity ward was my carport, which has been filled with hay and turned into a lambing jug because the weather was just nasty. Today was the first day with some sun, so the little family was released into the house yard to soak up some rays. 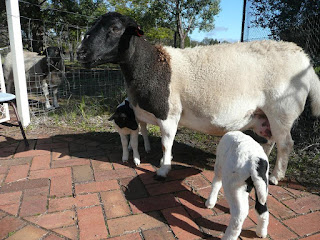 About an hour after Molly and her babies departed the carport, it was obvious Min was going to need the accommodation fast. 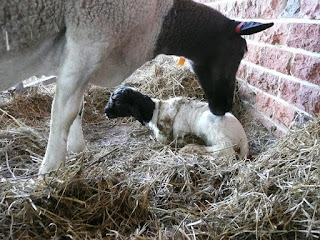 Her first lamb arrived within minutes, a ram. 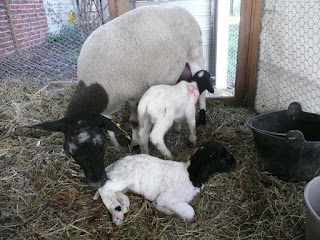 The second was well late and she ran out of puff, so I straightened the legs and eased the nose out. Another ram :-)

Normally Boof throws girls, so three to one the boys' way is unusual. I always enjoy when the lambs arrive close together because they form a gaggle and do everything together, racing, napping, king of the castle ...

Max is the only other ewe close to lambing, but she's always a tough one to guess. Last time she was "any day now" for three weeks. She was the size of a house and only had one small lamb. I hope she's not far off so her lambs can be close in age to these.

The little ewe has been named Elf, still thinking about the boys.