I went to an information day at the local ag supply shop last week, and won one of the lucky door prizes. A fox light ! It mimics the random flashing of a torch and is supposed to scare off foxes. I'm not going to rely on it alone, but it's certainly going to add to the measures I take to keep foxes away. 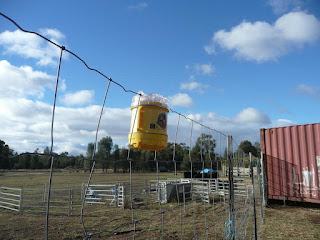 The fox light on the outer wire of the lambing pen. I move it every two days.


********************************
Saturday was a foggy morning with the promise of a sunny day to come. Up early to feed the animals, fog is one of those things that motorists hate, but makes for still, quiet mornings for those of us on foot to enjoy. I have some general scenery to post in the next entry, but here are some pics of next door's sheep.

I've been picking up the dropped hay from the base of the round bales each morning. My cattle and sheep won't stoop to eating it while there is fresh hay on the bale, but if I pick it up before it becomes trampled and soiled I can toss it over the fence to the next door flock, who is doing it a bit tough. 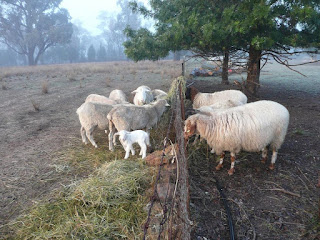 Half the flock, including the ram and the two day old lamb,
having breakfast while some of my flock visit. Looking the other way up the fence line as the rest
of the flock come down for a feed. 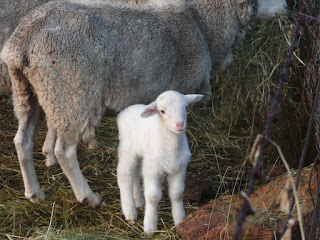 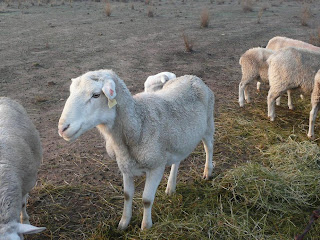 This is dad, the white dorper flock ram.

Dorpers are known for being good do-ers. I've never seen a dorper in this condition. If I needed proof that it's been a hard year, this is it. 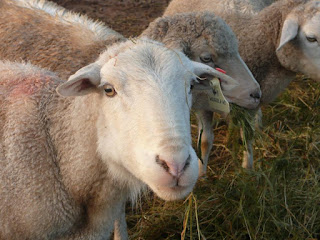 A close up of the big guy's face. He's a very laid back
ram and I think quite personable.