Since we've moved everyone into Chookmahal we haven't lost another hen to the fox. The system of locking Brewster and his girls into their hoochie (the half tank at the back) gives Shadow and his flock a go at the feeder first. Once Shadow's flock are let out and Brewster's door opened he and his girls get their chance to eat. It's eliminated the morning scramble where Brewster (being the dominant rooster) drives Shadow's flock away from the food.

It' won't be long before Mamma Chickie and the two light sussex chicks can join the flock. They are spending their initial week with the door of their cage open and free range of the house yard. Next week the cage will be moved down next to Chookmahal and they will be free to come and go with the flocks. 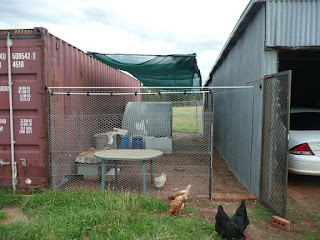 The geese are now off the nest and hogging the stableyard. I'll continue walking them down to the dam as often as possible until they decide to stay. At least the quick bath they take down there before coming back to the stable yard has made a difference to disreputable Burke.

We are wondering what to do with Charlie. An ex racehorse formerly known as Alluvial Lass (seven starts, seven losses), Charlie is DH's girl. Unfortunately she has a permanent injury and can't be ridden, and is being agisted because she has no manners with the cattle and sheep.

With virtually no rain since autumn it's not going to be long until the agistment place runs out of grass and we have to find her somewhere else, or a new home. 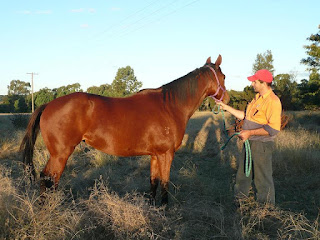