Burke and Wills are still sitting. Burke is so bored he now spends his day trying to keep the sheep away from the water trough. We thought about moving Wils off the nest, but when we lifted her (at great risk to life and limb) we discovered she had three more eggs than we knew about ... and we don't know how old they are. They could very well be still good. A quandary has been entered.

The final lamb for the season has arrived. Cleo, a first time mum, went into labour on Saturday morning and after an hour it became clear she was in trouble. All the first timers this year have had single lambs and the risk with a single lamb is that it has plenty of nutrition and room to grow. It would be better to have little, slippery, pointy headed twins.

Ben wasn't. So I straightened his front legs out and eased his non-pointy big head out and he entered the world at a great rate of knots. He was also covered in merconium, so his first experience of the outside world was a warm bath while his mother murmered sweet lamby nothings at him out of the corner of her mouth while stuffing it with sheep mix. Dorpers and dorper crosses subscribe to the "Newcastle Song" * school of nutrition.

Thankfully, he's a solid, energetic young fellow who wasted no time finding the udder and Cleo has proved to be a gentle and protective mum. A pleasing end to the lambing season. 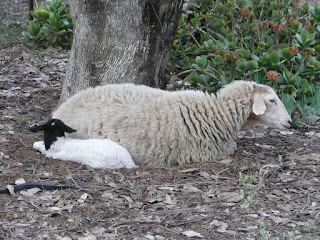 The fence on the next door pasture has been patched and re-strained and we're about ready to put the cattle in. They all have collars and tags in case the unexpected happens. The paddock is about 20 acres, more grazing area than in my entire farm ! 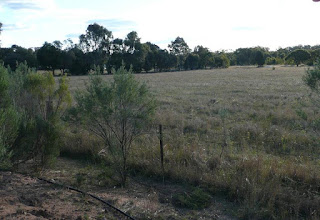 Looking south from the wall between our two dams 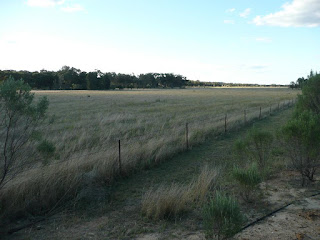 Taken from the same point as above, looking north 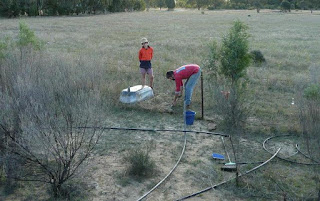 In other happenings, we still have two chickies, who have doubled in size. I am still supplementing one and a half of the triplets, the vege garden is going gangbusters, the crows are taking between two and four eggs a day (grrrr) and I resisted the urge to get some ducklings while I was buying sheep nuts on Saturday morning. They were sooooooooooo cute !!