I think the chances of goslings are virtually nil, but Wills is still sitting and turning the eggs. She's very dedicated, I hope they don't start exploding under her. Burke has given up bathing and looks very disreputable. I might march him down to the dam regardless just to make him wash up.

We have lost two more chicks, down to two now. One slipped out an improperly latched door, but I have no idea how the other one was taken, and so no idea how to prevent it. I am having dark thoughts about the crows.

Ziggy is now six months old, and it's time to think about when to wean him. I wish there was better pasture. The farm next door have said yes they are interested in renting us some pasture so that might make a real difference. We might have to set up a hot wire and a watering point, but it will be cheaper than a round bale a week.

Still no action from Cleo, I think she'll go in the next fortnight. It's time to do fecal sampling, to see what the worm burdens are. If they are not too high I can go without drenching as these dry conditions mean there won't be too many worm larvae on the pasture.


Here are some shots from the vege garden. 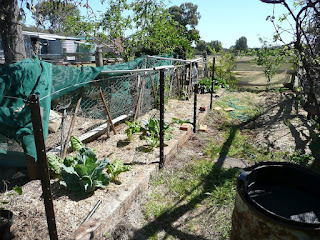 Looking west from the centre of the garden (the goose area is behind the fence with the green shadecloth). On the left, the closer bed has spinach, silverbeet, cabbage and onions. The further one is comfrey and a green striped tomato. At the very end are young nectarine and apricot trees.The shadecloth along the fence rolls out over the frame to cover the plants on the hottest summer days. 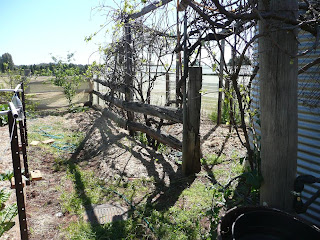 Same stretch of garden, slightly different angle. In the bed under the grapevine are green beans, butter beans, leeks, onions and asparagus. 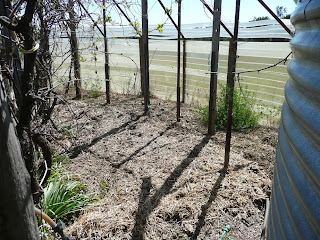 Facing northwest behind the grapevine in some weird sort of greenhouse is lucerne and two butternut pumpkins. The pumpkins are barely visible green blobs at the base of two poles. This area has been heavily mulched with waste hay and manure and should get some shade as the grapevine leafs up. 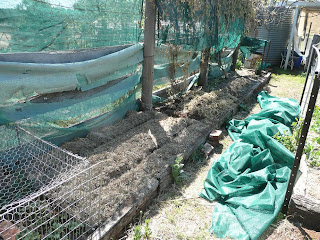 Looking north down towards the centre of the garden, the point from where the previous photos were taken is just in front of the water tank. In the bed to the left are strawberries (in the cage), borlotti beans, onions and areas about to be dug in which will have zucchini. 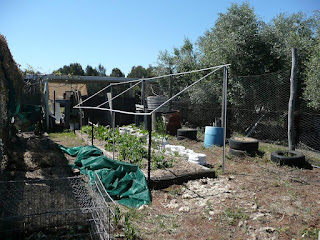 Same point as above. In the centre bed are spinach, silverbeet, beetroot, onion, leeks, peas and a heap of different lettuce varieties. This bed gets alot of summer sun, the shadecloth on the ground will be a curtain on the frame that can be drawn over the bed if the day is going to be over about 38C.

The white sacks down the edge of the bed are potato bags, containing King Edward, Kestral and Sebago varieties. In the two double tyres along the fence are golden nugget pumpkins. Over the fence to the right are olive trees.

Still to go in are capsicums and tomatoes. I need to find somewhere that can be bird netted. Possibly the goose area once Burke and Wills give up.
Posted by Elnini at 04:22