It has been a terrible week. Either the fox that we have peacefully co-existed with for three years has had a change of heart or a new one has moved in. We lost six chooks over the course of the week, plus one died of old age. A little irony there. I had been beating myself up over getting casual about locking the lambing pen where Shadow's flock had their residence in a pepper tree. Then we lost more after we locked the gate and it turns out that the fox is either climbing through the mesh or climbing over.

While climbing into a pen full of angry ewes to attempt a lamb is probably still too much for a fox, the chooks asleep in the tree were an easy target. What is left of Shadow's flock are now refugees in Brewster's run. Once Brewster and his crew have gone to bed in their coop I shut the door on that (so he won't emerge at dawn and attack the refugees) and let Shadow and his lot into the pen around the coop. They are used to being in a tree so we've fixed up a few branches for them to perch on.

This pen has a hotwire along the top and the mesh is only two inch holes. There have been no losses since we started this. Since all surviving the first night Shadow and his hens put themselves to bed in the pen without urging. They seem to have figured out it's safer.

No news on the goose front. We are going to start taking one egg at a time, hopefully she won't really notice and get too upset. The eventual aim is to have her give up voluntarily. 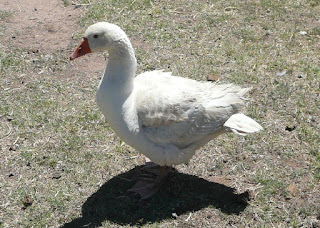 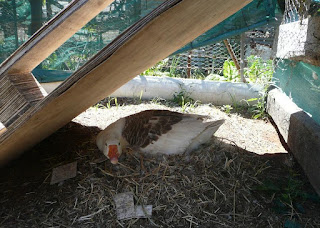 Wills on her nest

Little Edo was castrated and weighed on Friday. He was 130kg, up from 80kg when he came here a couple of weeks ago. He and the other cattle are delighted with their new pasture. Bringing them up to the fence for a brush and check over is like dragging boulders. They are about the same shape too. 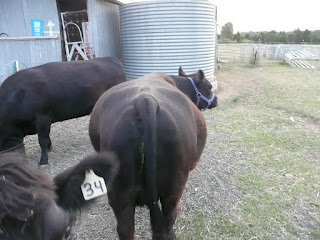 This should be bloat if you go by the obvious signs. Since she jogged across the paddock to get a snack I think it is merely the most full rumen I have ever laid eyes on.

The two light sussex chicks are growing like weeds. They are starting to lose fluff and gain feathers and are in the"vulture stage". 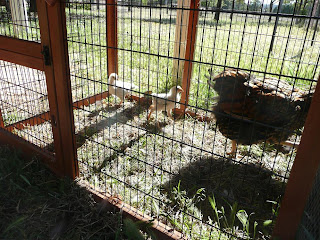 All the sheep have been drenched, the early rain and warmth bringing the barber's pole worm on quickly. The only good thing about hot & dry weather is that there is less of a worm burden on the pasture. Now that Cleo has finally lambed there are three more sheep husbandry operations for the lambing season. Vaccinate all the lambs, dock Ben and shear Cleo and Emmaline. Emmaline in particular needs it. She only has six months of fleece on her but looks like an old english sheepdog. I'll save her fleece and see if it can be spun.

The vege garden is racing along with the warmth, while I can keep the water up to it. The spinach needs harvesting every couple of days and I steam and freeze slabs of it for later when it's gone to seed. The peas are also yielding beautifully, none of the pods make it to the kitchen. The peas end up in the gardener and the shells end up in the sheep tub.

Aside from all the leafy greens, butter and green beans and borlotti beans are making a good start and onions and pumpkins are well away. As yet to get the tomato seedlings in, I've been holding out for the goose nursery to plant them in. We are now three weeks over the expected due date and I'll have to plant the tomatoes elsewhere or evict the geese soon.

This is a shingleback lizard. Also known as a bogeye or pinecone lizard. They are slow moving and while they gape and hiss at you, you'd have to be really clumsy to get bitten. Related to the bluetongue lizard, I think they are part of the skink family. Whenever I find one I relocate it further from the house so it won't get stepped on. This isn't the biggest I have moved, it was only about a foot long. They do get just a bit bigger. 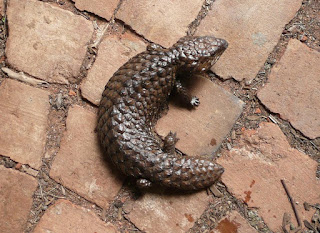