Here's the latest results of the drought, $1000 worth of hay and what is left of my lawn. Which closely resembles toast. 100 bales at 2 bales per day makes this 50 day's worth.

Our optimistic and kindly hay guy dropped in on Christmas eve with a cotton bale tarp and covered the pile for me. Just in time for the two inches we received as a Christmas present. Nothing since, but there is now a tiny bit of green pick to keep the sheep from boredom. 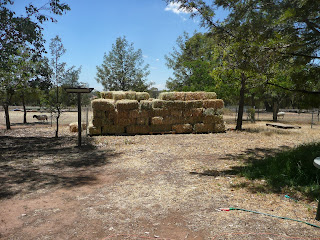 With the last two years being really hard on the wildlife I was very, very pleased to see this young goanna wandering around. I think he's a sand monitor, and is about two feet long. He can get to six feet I think. 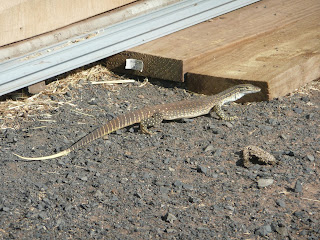 We spent a week babysitting young Willy. A merino lamb who had been discovered abandoned, he fell on his feet. He had been bathed and is wearing a collar with his mum's phone number on it. Didn't take him long to start getting grubby at our place, like being on summer camp :-)

He accompanied me on all the chores, he quickly learned the routine and would run ahead to where the next job was to be and then race back to encourage me to hurry up, bouncing and bucking all the way. He also sampled just about every plant on the place and especially likes saltbush. 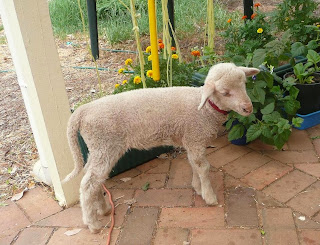 The cats struggled with the heat, you know how it goes, so many places to nap and only so many hours to do it all in ... Here's Asante coping with the extreme temps . You don't have to click/enlarge the photo to see the smile on his face ! 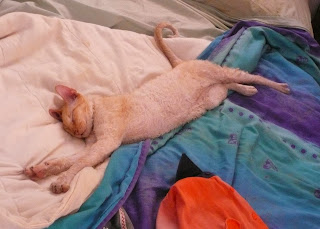 Alvin loves the farm ute. If you open a door he's there like a flash waiting for a ride. He has to have a harness that connects to a seatbelt if he's in the back seat, or to a fastening point if he's in the tray. He doesn't love the harness, but it's all in a good cause.

He also likes to lay in the tray with the tailgate down, it's an excellent vantage point and the chickens can't find his dinner ! 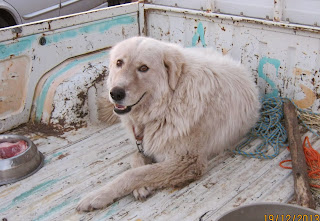