Just a quick roundup on what's been happening in the background here.

The geese won't go back to the dam, they won't even go for a swim unless I stand on the bank and make them stay in. When I walk away they are hot on my heels. I can't figure out why, unless it's because they are moulting ? The stableyard looks like an explosion in a doona factory. They are so keen on sticking to the stableyard that they didn't even want to come into the house yard to graze, normally a real treat.

Burke nearly killed himself the other day. He was attacking the chain that closes the stableyard gate and managed to get his beak stuck in the carabeena. He was dangling there when we went out to feed them breakfast. I don't know how long he had been there but he was very subdued as we lifted him up and freed his beak. Luckily he didn't do it while we were at work !

The chickens are all fine. The sussex chicks, Frank and Pippi, are starting to mingle with the flock, but are still small enough to get back into the house yard so they aren't being as quicky integrated as I'd like. I suspect the guineafowl are laying under the shipping container but can't see into their excavation to look for eggs. We might have to fence that off before one starts sitting under there.

The cattle still have plenty to eat on the new pasture. It's time to put a weaning ring in Ziggy's nose, but that will be a two person job and will have to wait until DH gets home before dark one day this week. That means I'll be milking again, fresh milk at last !

The sheep are well. Emmaline and Cleo (and Medea because she was very itchy from grass seeds) were shorn and feel much better. We vaccinated all the lambs and put an ear tag in Flash's left ear. We are leaving the tagging until they are almost grown so we can judge the fit to the ear better. Boof had his feet trimmed and got a shot of Pentosan, an anti-inflammatory arthritis drug. The course is 1ml once a week for four weeks, and hopefully it will make a difference to his comfort. 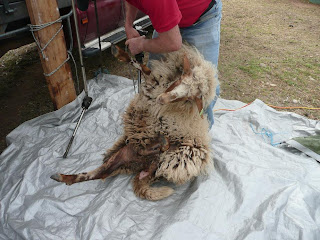 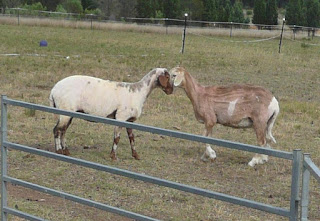 Finally some news at work. I have been appointed to a position at the same grade and at the same location. It's not the one I would have picked, but there may be some scope for a sideways move before the shuffling finishes. Either way, I have a job. Would have preferred a redundancy, but you can't get all your wishes.

Now I suppose I'd better start making some arrangements for Christmas .... I'd been pretending it wasn't happening up until now, but it's coming, ready or not !