Had a bit of a scare today, I was planting zucchini in the vege garden and heard the sheep stampeding. Now, a sheepalanch occurs when they run for feed, and they get a very good pace up too, but this sounded different. It didn't sound excited and happy, it sounded panicky. I don't know how to explain that running hooves can sound different even when going the same speed, but they did.

So... I headed round to see what was wrong and saw two dogs running along the fenceline. A cattledog and a black hairy thing twice the height of the cattledog. Sound the alarms !!! I called the sheep into the lambing pen, designed to be safe from dogs, threw them some grain and got DH to ring the neighbours. One also has sheep and she headed out to see if she could cut the dogs off. All that time training the sheep to come immediately when called paid off ...

While I was locking up the sheep three kangaroos came bounding out of the forest away from the dogs, followed a few seconds lated by a fourth, who took a shortcut almost within arms reach of me in his hurry to catch up with his friends !

We went up our fenceline and came across a beekeeper tending his hives over the back boundary. He'd seen the dogs come out under our fence and run off to the northeast. DH jumped in the car and paid a visit to the one house in that direction and lo & behold the dogs belonged to them. He read them the riot act and hopefully the dogs won't be back. These dogs are chained all the time and bolted when let off accidentally. Can't blame them, but having careless and neglectful owners won't save the dogs if they attack someone's livestock. The dogs will pay for their owner's errors.

Here is a shot of the pawprints of the bigger dog, next to my not-so-small foot. 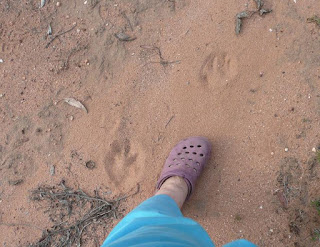 Meanwhile, back at the house, the crows were entertaining themselves. We recycle plastic takeaway bowls for feeding scraps to the chickens. This one had been emptied and was sitting on the ground waiting to be taken back inside. The crows picked it up and carried it to the birdbath and were playing boats with it. They keep suprising me with their intelligence ! 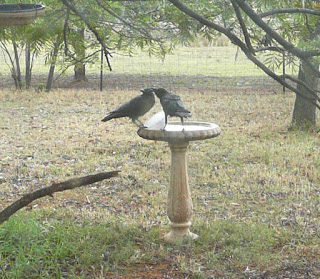 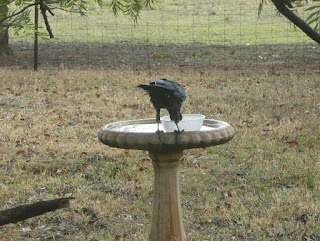 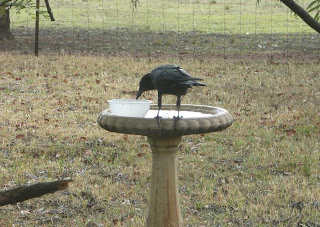 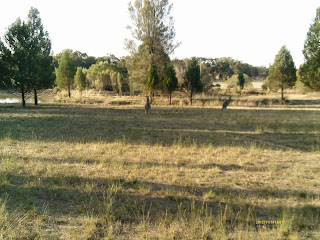 These are straw necked ibis, a waterbird. For some reason these guys have suddenly started to hang out in my very unswampy paddocks. 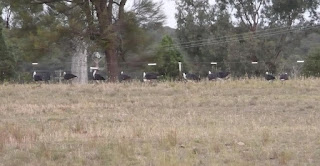 ************************
This is the bumpout that we've made so the cattle can be fed and groomed easily. The rented paddock is at the back on the right and the little corner is fenced with electric fence, making me a little corral so I can catch them for doctoring or putting a halter on etc. 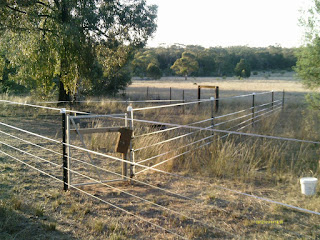 Here are the boys in the bumpout getting supper. Ziggy on the left, Jack at the back and Edo in the centre. 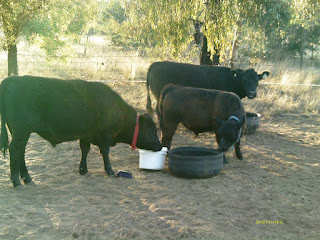