I finally have some photos of the lambs born last Monday. So, without further ado I would like to introduce : 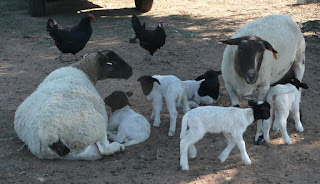 All five lambs and their mums 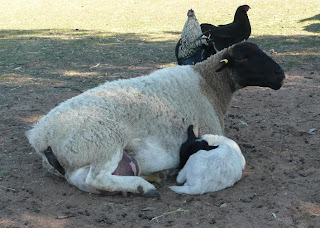 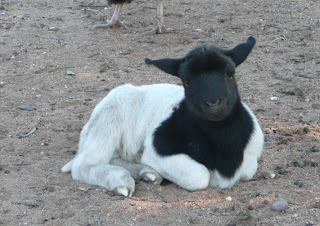 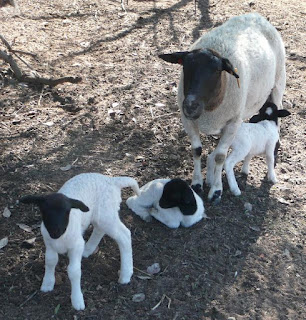 I am milking the ewes twice a day and taking about a litre each time, to mix with the formula. Medea's lambs are drinking entirely from her and Min's lambs are getting about 50% of their needs from her. Once they can get their mouths around the second bigger teat I won't need to milk her or feed them.

Not that it takes long, about ten minutes to milk each ewe and about three minutes for the lambs to demolish their four feeds a day. They are very efficient :-) They are having alot of fun as a group and specialise in chasing chickens.

Burke, the male goose, finally had a meltdown today. All his frustrations at having a farmyard happening around his nest finally broke loose and he attacked and demolished a plastic bucket. He bit it, and threw it, and beat it up with his wings and even jumped up and down on it with his big webbed feet. He pulled the handle off and knocked the bottom out of it and when it stopped fighting back he threw back his wings and trumpeted his glory to Wills. I hope she appreciates his bravery.

DH and his son have been mowing more of the pastures. They have finished the first ring of the paddocks close to the house and are now down in the forest paddock doing the meadows above and below the dams. They came across the shed skin of a six foot brown snake so are watching carefully for the owner.

We also spent the afternoon direceting car parking at the caravan and camping show in town. The fire brigade does it and the show society donates a fee to the brigade, which is then used to purchase things for the trucks and fire shed.

While the boys were mowing I spent a day juicing oranges and freezing the juice (from the little tree in the goose yard which has borne quite heavily) and steaming and freezing flat packs of spinach, and freezing big rounds of surplus sheeps milk for making cheese later. We have three freezers and they are all full. I think I need to plan some meals to empty them out a bit.
Posted by Elnini at 04:35