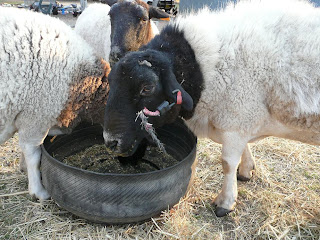 Boof managed to get an ockie strap hooked into his ear. I think he must have been trying to wriggle his way into the chook pen for the scratch mix. It took a bit of wrangling to get it out without hurting him, but he is now hook-free. On his first night here, three years ago, he managed to get his head stuck in the base of a wheelbarrow. One of the legs the barrow rests on. Getting that off him was an adventure too...

As he was already crabby he wasn't going to back down when Flora decided that sharing with sheep was beneath her. Never having seen sheep or chickens she's trying to assert her place on the farm. The chickens sqawk and flap and scatter. The ewes can't be bothered with all the fuss and just melt away in front of her and reform behind her. Boof was in the mood for a fight and I think it came out a tie. 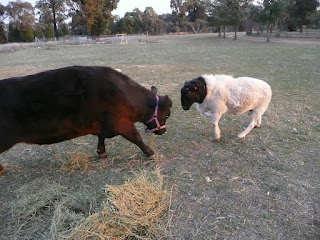 Edo is proving to be a delightful boy. He's up for a scratch and brush and likes to lick your face in appreciation. Given that a cow's tongue is like a giant cat tongue in texture it makes for a very exfoliating experience ! 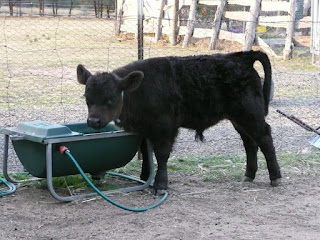 I was patting him in the stable yard this afternoon, where he had been entertaining himself by stirring up the geese through the fence. I heard a cow come into the yard behind me making "ello ello ello, what's going on here ?" sounds and expected to see Flora coming to see what was going on with her baby. Instead it was Big Moo ! She ordered Edo to follow her back to the herd and he meekly trit trotted off behind her. Not sure what that was all about.

This is Min in "anytime now" mode. One thing you do alot of when raising livestock is look at behinds. Are they scouring ? Are they making up an udder ready ? Are they on heat ? Are they getting floppy ready to lamb or calve ? Are you following them waiting for a fecal or urine sample ? Do they have mastitis ? 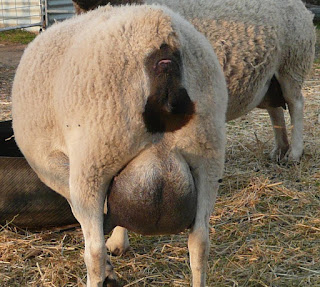 You might glance at eyes and ears and noses and teeth, but the real business of life and death happens at the padded end of the animal. I can tell the sheep apart as easily from behind as in front !

The geese are now about half way through their sitting. Burke is deeply committed to honking at anything in the general area of the nest, but remains a gentle goose at heart and only bites watering cans and sheep's noses. Wills, on the other hand, will not only bite, but will hang on and shake the bitten appendage. Ask me how I know...

The chickens are laying well, several of the pullets have come online and are laying cute little beginner eggs. I suspect the crows are getting a couple of eggs a day, but I am not sure which nesting site they are stealing from. They are taking my fake eggs too. These are used to encourage the chooks to lay in a particular place, as they notice when all the eggs disappear from a nest all the time and deem it a bit unsafe. Leaving a fake egg reassures them.
Posted by Elnini at 05:34