Where to start ? I think I'll try to get a few posts done over the next week or so to catch up.

First, the next stage of the logging.

The machines started work during a period of high bushfire risk. The logging guys have a threshold of wind/heat/drought index conditions and have to take measurements during the day. If the number hits the threshold they have to stop immediately and have to leave a fire crew on site.

It was still fairly nerve wracking, a fire roaring up through the plantation had the potential to spread onto our very dry pastures. The smoke from nearby fires was so heavy that not only the distant mountains were gone, the other side of the valley was invisible. 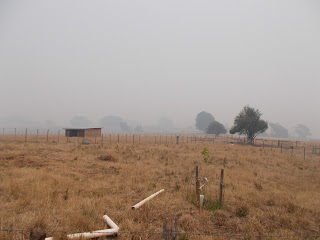 The first trees to go were on the line of the road they wanted to put in for the log trucks. There are tracks among the trees and there were tracks on the pastures before the trees, but this road had strict criteria for grade and bendiness. It will go down to a flat platform that apparently had a hay shed on it in a previous life. The logs were gathered at that point and loaded onto the trucks. 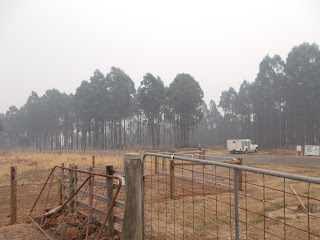 You can see the sort of debris that is left behind, imagine the whole block this deep in slash. 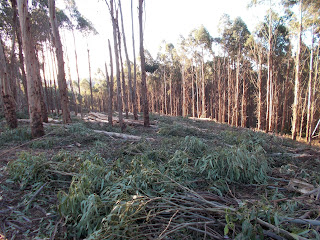 The start of the road, white road base carted in and formed to level out the drop from the Sledge Track into the paddock. 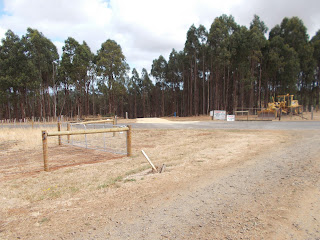 And suddenly the vistas open up. They worked so fast that by the time I felt they were clear enough of the road edges to go down and take photos (about a week after the road was done, they are waving whole trees around, who wants to get too close !) they had made big inroads into the upper end of the plantation. 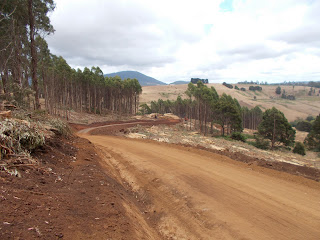 There were many weeks of work yet to come, they had just started on one end of the trees, but the potential of the views became clear. It was also the first chance we had to get an idea of the actual lay of the land. Prior to this the trees cloaked all the folds and rolls. 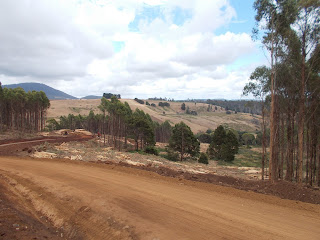