Last month we took delivery of a trio of geese. With any luck we have two females and a male. I probably won't know until someone starts sitting.

Back in Dubbo we had a pair of geese that couldn't find their feet if you painted them pink. They didn't even know there was a second dam for two weeks until the day they followed some ducks over the whole five metres separating the two dams. They were named Burke and Wills, as they were terrible explorers.

These guys are much more efficient and have checked their area out thoroughly. They therefore get to be named after much more successful explorers. Blaxland, Lawson and Wentworth are credited with finding a path over the Blue Mountains west of Sydney to the inland plains. 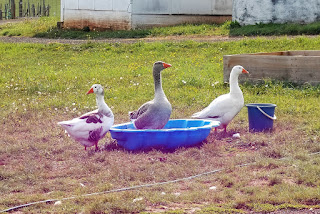 There's been widespread flooding up and down the east coast of Australia, including Tasmania. There are blocked roads, washed out bridges and evacuations. With a 100m drop between the houses and the nearest river (the Brid River on the bottom boundary of the ex-plantation) we are unlikely to flood.

Easterly winds blow the rain straight into all the sheds and shelters, as they are designed to provide shelter from the prevailing westerlies. This means that alot more is wet and soggy than in normal rain events, but thankfully the animals have all come through ok. We even had a little ewe lamb born in the middle of it.

Trina took some photos from her back porch of the river. 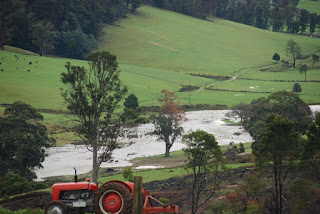 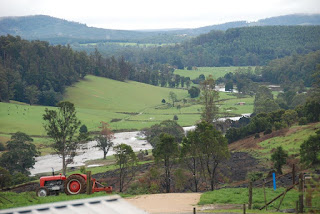