An update on Molly.

The vets ended up doing a mastectomy on the bad side of her udder, the infection was walled off from her body successfully, but would not drain. So after a long and bloody surgery followed by another two general anesthetics during the next week to pack and unpack the wound, the long slog of healing the surgery site began.

For six weeks I've irrigated and cleaned and sprayed and watched. The wound being on the bottom of her udder meant that she filled it full of dirt and muck whenever she sat down.

Here's a photo of her with her wearing her protective bra just after the surgery. This didn't last too long, as I'm not the world's best seamstress, but this lingerie bag and elastic contraption kept the dirt and flies out of the wound after the surgery for long enough to start the healing well. 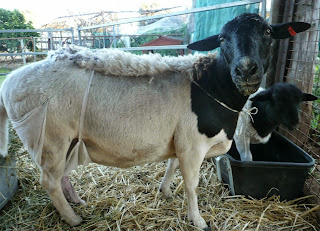 All the treatment following the surgery was done on my hands and elbows in the cow headbail, in the cold or wind or rain. We even dealt with a maggot attack. Molly can turn around completely in the headbail and could have trampled me. She didn't even have to go in twice a day, there's no way to force her into it. I owe our success completely to her tolerance and co-operation.

She's now on the last leg of healing. From an eight inch long opening into an empty space the size of a grape fruit, the wound is now barely an inch long and more like a groove than a cut. I am sad she lost that side, but really, really pleased we saved this gorgeous girl.
Posted by Elnini at 05:27