Alvin has been a bit of an enigma.

All was going swimmingly, as you can see from this photo of a maremma hard at work on a sunny afternoon... 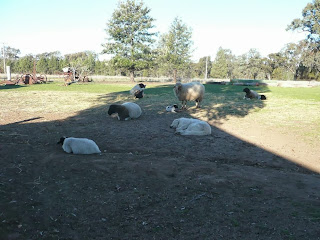 Then something changed and Alvin and the sheep went their separate ways. The love affair fizzled, the passion died, the sheep smell funny and Alvin wears army boots.

I have no idea what went on, but I guess the only thing to do is start again. In the meantime, poor Al is lonely and bored and I am weighing up getting him a female pup of some soft-mouthed gentle breed as a companion and keeping him on as a pet rather than a sheep guardian.

I need a maremma-whisperer ! Where's Cesar Milan when you need him ? I hate not knowing what to do.

We've also installed an e-fence to stop him roaming and getting shot or run over, though he doesn't seem keen on patrolling any more.

The chook family is growing. A friend brought up four chooks that she needed to rehome before moving across the country. They've settled in well and have bonded with the flock, going to bed in the new chicken hoochie. Of the chicks, we lost the sebright (hawk) and the welsummer (mareks) and the barred rock turned out to be a rooster. He was taken home for breeding and replaced with a silver spangled hamburg and the welsummer with a barnevelder. When they are all clucking instead of peeping they too will join the main flock.
Posted by Elnini at 04:55