Today we have the latest lamb and some more Alvin.

Little Morgan was born on the 15th, half an hour old in this pic. He was born breech, which means his back legs came out first. When that happens they can suffocate because the head is still inside when the umbilical cord parts and they can't start breathing like in a normal birth. Seeing back feet rather than front I slipped in and helped a little. It was a good feeling to see him start to breath and shake his head :-)

His Mum, Max, is our elderly sheep. So old she has no teeth. I thought she was too old to get pregnant again, but where there's a will there's a way. She's in great condition because being hand fed means she doesn't have to work to find food, so she will be able to raise a single lamb easily. 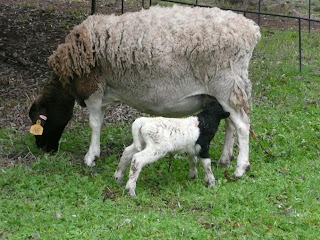 Alvin is gradually convincing the sheep that he means no harm. His habit of galumphing through the middle of the flock has slowed this process somewhat, and he recieved his own fright yesterday when he got in the way of a sheepalanche and wore a ewe fair in his midriff. 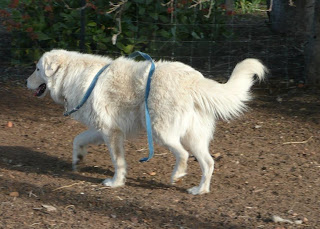 The main components for his e-fence arrived today and with a little luck we may have it installed by the weekend. If his training goes well he will have the run of the farm without the risk of leaving the place and getting run over or shot. 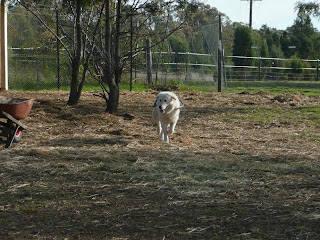 He has such a friendly face, but with some bad dog attacks on sheep fresh in everyone's mind, there is little tolerance for a strange dog crossing other people's land. 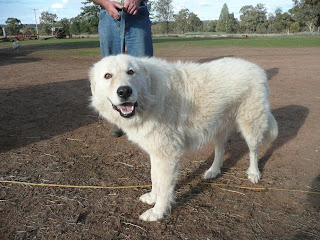 Still to come : New chickies and Flora.
Posted by Elnini at 05:33