These are the two new Black Leghorn pullets, bought from the chicken auction two weeks ago. One of them laid their first little creamy egg today. 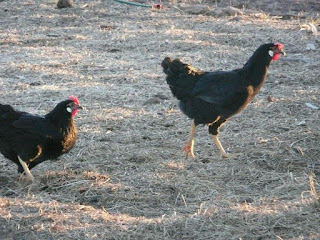 They've tentatively attached themselves to Frankie, but he's not very mature yet and he may lose them to Shadow if he doesn't look after them better. Luckily for him, even if that happens there should be another six assorted pullets coming in a month or so and he'll have another chance to build a flock then.

Meanwhile, in chookmahal, Brewster is hogging the hoochie with his four hens. There's room in there for everyone, but no-one else wants to share with the grouch. This is Brewster's hoochie ... 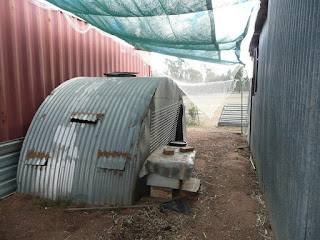 And since the Great Fox Incident the other two flocks, ten chickens in all, have been sleeping here : 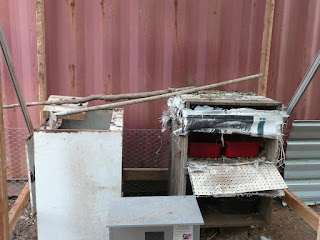 That may have been acceptable in an emergency and during summer, but there's no shelter in winter and it's just too crowded. So DH and his son built this : 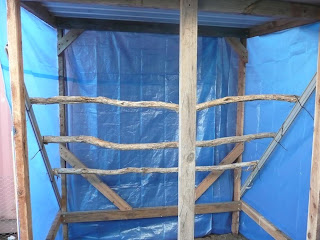 There's a tin roof to keep off the rain, tarp sides to keep out the wind, and paperbark perches to be nice and soft on chookie feet. There will be two doors when time permits, to allow them to be shut in on the coldest, wildest and wettest nights.

And the new, patented fox chute is in construction ... more on that in a later blog !
Posted by Elnini at 05:27