We had a few more visitors, there is obviously a sign at the front gate that only animals can see !

I was down at the dams talking to the sheep before bringing them up for supper and lo and behold a ram appeared at next door's fence ! He seemed very interested in my ewes, and Boof marched them all off up the hill away from the stranger as fast as his stumpy legs would go.

By the time we walked up the hill and over to the round bale near the feed shed the strange ram had raced down the driveway next door, made his way along the road to our driveway and was walking in our gate ! I shut the sheep paddock gate fast and then the front gate so he couldn't get back out onto the road and called the LHPA ranger to come and check his tag. 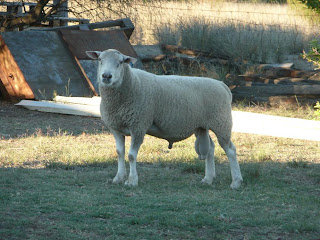 We managed to get him into the race and took his PIC number from his ear tag. As the ranger was leaving to go back to the office to run the ID, three ewes appeared at the front gate from the other direction ! I rushed them into our paddock to keep them off the road, much to Igor's delight as first he found food and water and then the patron saint of sheep delivered him a harem ! 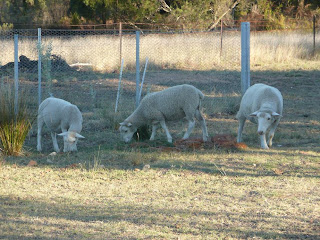 The ewes looked familiar, and once the ram from next door appeared at the fence with the remainder of his flock the suspicion was confirmed, these ewes had escaped from next door. I called the Council ranger, who deals with stray stock, and the neighbours to let them know I had some of their ewes, and went out to check on everyone. Next door's ram and Igor were discussing Igor's advances on the three straying ewes. I can't say it made much impression on him ! 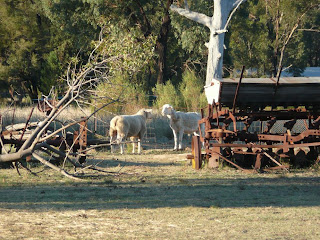 The ranger and the neighbour arrived at the same time and we were able to separate Igor from the ewes by stealth and locked him in the lambing pen with some food. Then we cut the boundary fence and returned the ewes to their flock. At that point I realised the back gate of the lambing pen was open and my flock had gone in to be stickybeaks. Igor started making sweet eyes at Boof's ewes and it was on for young and old !

We rushed over to separate the two rams and stopped short as they crashed head on. All three of us looked at each other in amazement, the impact had been nothing short of devastating, but the two rams just sat back on their heels for a second. Knowing Boof already had a back injury from previous silly buggers, there was no time to waste.

Grabbing some pieces of metal pipe we all ran in, banging the pipes together, distracting the rams from each other and chasing the whole herd into the yards. Once all were there we did some rapid fire drafting and sorted my lot from Igor (and I have never been so glad of a relaxed flock and an obliging flock ram as I was right then) and parked him in the properly secured lambing pen for the night.

The ranger and her co-worker came back next morning with the ute and a large dog cage on the back. One good look at Igor told them that he wasn't going to fit in that cage willingly or unwillingly so they went away and came back with the cattle trailer. Igor loaded like a pro, probably glad to get away from the madhouse and the detective work of tracking down his owner commenced.

Turns out the people who owned the PIC that was on his ear tag sold a batch of older rams in Dubbo in March, they came from a couple of hundred kilometers away. The only batch that didn't go to slaughter were sold to an agent, who only bought rams for one farmer that day. He lives on the other side of town so we have no idea how Igor got over here ! As of today I am waiting on news from the ranger as to whether the owner came to claim him and whether they can put together the story of his walkabout.

He's actually a good natured ram, he consistently ran around us rather than at us, and did everything we asked with no fuss. I hope there is a harem for him to go to.
Posted by Elnini at 05:16