It's a couple of weeks since the last post and nothing has changed with the weather. We have had a tiny 4 mm of rain and day after day of heat and wind. We have eight weeks left of house water and the vege garden tank ran out yesterday. We have to decide whether to allocate water from stock and house use or let the garden go for this year.

Trees that previously survived ten years of drought are dying this year. Kurrajongs (which are normally drought fodder because they keep their leaves well after everything else is dead) have dropped all their leaves and pods. We've lost all the nectarines and apricots, the olive trees are even dying. The cactus plants have gone yellow. It's been really hard and it's not even January yet...

I am feeding the chickens wholegrain bread soaked in whey twice a day, as there is no green pick and no insects to forage. At least the whey adds some protein, calcium and fats to their diet. Though the scratch mix is supposed to be a complete feed, it does contain mainly carbs.


The sheep are all up in the house paddock. They are essentially being drylotted. The house paddock is a small area to sacrifice while attempting to keep some ground cover on the rest of the farm to hold the soil down. They have a round bale and some supplements and I am essentially hand feeding them now. We need to cut the numbers, sell the ewe lambs etc.

The neighbour's paddock, that should have carried the cattle all year round with any kind of rain at all, will be exhausted in about a month. Then I'll have to dry lot the cattle too. Other than the cost, it would be an awful lot more convenient to just walk out the back door to milk. 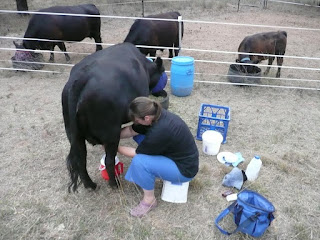 This is my current milking "parlour". I have to pasteurise anything that I use for cheese because there is so much dust, carrying all sorts of wild yeast and bacteria. DH bought me some hair nets. At about $5.00 per hundred they are a cheap and easy way to keep some of the flying dust and debris out of the milk. I soak them in sanitiser first and then they just fit over the top of the bucket, kept in place by the elastic. 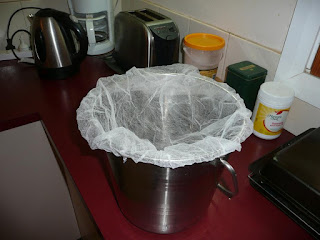 This is the most recent equipment investment and I think it's really been worth the money. This little trailer hitches on behind Methusela as if it were made to match. It carries 300 kg and has a tip function as well. The sides can drop down for carrying bigger stuff, but in this configuration will fit more than a full bale of hay. 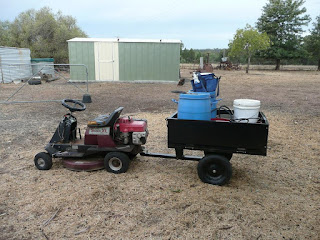 I use it every second or third day to carry hay or mixed feed down to the cattle. It will also come in handy for collecting firewood and carrying fencing supplies or water.

The rooster that showed up (photo on the last blog entry) has been found a new home with a flock of hens that had no patriarch. He is very full of himself now, but did think he'd been snatched by a fox when we grabbed him late at night to relocate him. Oh, the noise !!

A sheep walked in the front gate the next day and stayed for a couple of days. No-one nearby had lost any, and she had no eartag. Eventually we sent her next door (the other side to the cattle pasture) with that neighbour's consent, to join her little flock of ewes. She seems quite happy now.